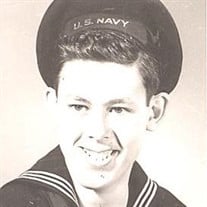 Morris (Mo) A. Davis, 92, of Adams, died on Tuesday, October 1, 2019 at the Vermont Veterans Home in Bennington, VT. He was born in New Canaan, CT on March 10, 1927, a son of the late Ora and Florence (Bennett) Davis. Mo was raised in the town of Barnet, Vt where he attended school. He left home at the age of 15 to work at the Fairbanks Morse Scale Co., in St. Johnsbury, Vt. Mo enlisted in the United States Navy during World War II on his seventeenth birthday. During his time in the Navy he was trained as a second class electrician. After receiving his honorable discharge he was able to graduate from the St. Johnsbury Trade School with the class of 1947 because of credits earned while in the Navy. Following his graduation, Mo was able to find a work as a truck driver hauling logs and lumber to many locations throughout New England. He also loved sharing stories of hauling automobiles from Ohio to Washington State. While working on a highway reconstruction job in 1952, he was introduced to his future wife, Alice Bobowiec Davis whom he married on April 18, 1953. They later made their home and started their family in Adams, MA. He then worked at the former General Electric Co. from 1953 until his retirement in 1987. Mo is predeceased by his wife, Alice, who passed on June 15, 2015. He is also predeceased by his three brothers, Irving, Albert and Bertram Davis. Mo is survived by his two daughters, Patricia Decker and her husband, Thomas, of Readsboro, VT; Debra Stawarz and her husband, Paul, of Adams; two Grandsons, John Decker and his wife, Anne, of Adams; Michael Decker and his wife Christa of Chester, MA,; two Great Grandchildren, Avry and Ella Decker of Adams; several nieces, nephews, grandnieces and grandnephews. The funeral will be held on Friday, October 4th at 12:00 Noon in the PACIOREK FUNERAL HOME, 13 Hoosac St., Adams. Burial will be private at a later date for the family. Calling hours are Friday from 10:00 A.M. until the time of the service at the funeral home. Memorial donations may be made to the BAYADA Hospice, 1222 Putney Rd. Suite 203, Brattleboro, VT 05301 or to the Vermont Veterans Home, 325 North St., Bennington, VT 05201.

The family of Mr. Morris "Mo" Davis created this Life Tributes page to make it easy to share your memories.

Send flowers to the Davis family.