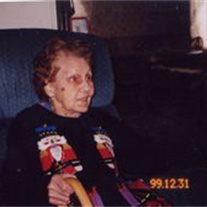 Mrs. Mildred A. (Bordeau) Letourneau, 86, of 9 Water St. Adams, died Saturday morning at North Adams Regional Hospital, after being admitted earlier in the day. She was born in Adams on August 1, 1919, the daughter of the late Mary (Gamache) Bordeau and Fred Burdo. Her mother died when she was 2 months old, and she was raised by her maternal grandmother, Sarah Dubois Alderman, on a farm at the foot of Mt. Greylock. She attended Adams schools, including the former Notre Dame Elementary and Liberty Street Schools. She first began working at Sprague Electric Co. in North Adams during World War II. She then worked at the former Brightwater Paper Co. in Adams for 18 years, and, finally, worked at the former W.B. Plunkett Memorial Hospital as a housekeeper for several years until the hospital closed in 1974. She was a communicant of the Parish of Notre Dame & St. Thomas Aquinas, Adams. She enjoyed collecting rocks and minerals and was a member of the Northern Berkshire Mineral Club from 1965 until 1985. Her first husband, Joseph E. Aubin, whom she married on October 8, 1938, died December 6, 1966. She is survived by her husband of 33 years, Albert R. Letourneau, whom she married on August 18, 1972; 2 Daughters - Shirley Aubin Miller and her husband, Ronald, of Adams; and Lucille Aubin Jarvis and her husband, Russell, of Adams; 7 Grandchildren, several great grandchildren, and several nieces, nephews, grandnieces & grandnephews. 2 brothers, John and Harold Bordeau, and a sister, Lillian Thiel, are deceased. Funeral services will be held on Tuesday, October 4th, at 1:00 PM in the AUGE-PACIOREK-SIMMONS Funeral Home, 13 Hoosac St. Adams. Burial will follow in Bellevue Cemetery, Adams. There are no calling hours. Memorial donations may be made to the Berkshire Humane Society through the funeral home.

Mrs. Mildred A. (Bordeau) Letourneau, 86, of 9 Water St. Adams, died Saturday morning at North Adams Regional Hospital, after being admitted earlier in the day. She was born in Adams on August 1, 1919, the daughter of the late Mary (Gamache)... View Obituary & Service Information

The family of Mildred A. Letourneau created this Life Tributes page to make it easy to share your memories.

Send flowers to the Letourneau family.