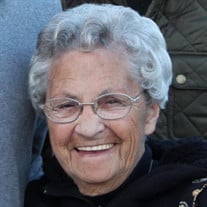 Mildred “Millie” Hanke (Kryston) of East Road in Adams passed away unexpectedly on November 1, 2018. She was born on June 20, 1932 to Josephine (Golebiowski) and Peter Kryston of North Adams. Millie reminisced about growing up on River Street and being part of a close-knit neighborhood where everybody knew one another. The Great Depression made it a tough time to be a kid, and she credits her older sister Mary (Michalenko) for taking care of her, “If it were not for Mary, I would not have had a Christmas”, she would oftentimes say. Millie left school after the 8th grade and began working at the Wall Streeter Shoe Company. In later years she worked at Sprague Electric doing piecework assembling transistors and other electronic devices. She was such an efficient and skilled worker that her bosses would time her when they introduced a new product line so that they could set a benchmark for her coworkers to meet. In the mid-1950s she met Bill Hanke of Adams during a dance at Swistaks in Cheshire. Millie and Billy, as their friends knew them, spent the next 49 years of their lives together raising a family on East Road in Adams. She continued to work at Sprague sporadically, and in later life worked in the bindery at Excelsior Printing. She and Billy enjoyed their retirement years together taking long rides, gardening in their yard on East Road, and enjoying time with their family and friends. Billy passed in 2004. Millie and Billy attended every sporting event that their two sons participated in during high school, and the chairs around their kitchen table were often filled with their son’s friends who all got a kick out of her outgoing personality. Millie loved her family and continued to support her boys over the years in various ways. She also loved her grandchildren and entertained them at Easter with Easter egg hunts, and at Christmas with a tree surrounded by plentiful gifts and a wonderful Christmas meal of her famous homemade spaghetti. Millie’s favorite holiday was Christmas, and she dedicated many hours to decorating her house. She especially loved to set up her expansive “Christmas Village” and numerous other decorations. Another highlight of Christmas for her was participating in the pierogi assembly line with other family members at her nephew Eugene Michalenko’s house. Millie treasured the company of friends and was surrounded by loving family members, especially following Bill’s death. She traveled with her sister-in-law, Marie Grande and her niece Melissa Grande on bus trips to explore new places. And on many Saturday nights she could be found at Marie’s kitchen table participating in a lively game of Phase 10 and a good laugh. Her niece Rosemarie visited her often and helped her with errands and getting around town as Millie had stopped driving a few years prior. At the time of her passing Millie continued to maintain a close friendship with Beverly Schneider (Sartori) of Cheshire, formerly of the old River Street neighborhood and a lifelong friend. Millie enjoyed the time she spent with her niece Janice Hayer and her husband Joe. They included Millie in all of their family events and gatherings, checked in on her often, and assisted her by taking her to doctor’s appointments and grocery shopping. Janice is Millie’s sister Mary’s daughter. Mary took Millie under her wing when she was a child, and Janice and Joe continued the tradition when Millie needed a bit of help in her senior years. Millie’s immediate family is forever grateful to their family and friends in the Adams area who took such great care of her. Millie’s husband Bill, son Bruce, brothers Frank and Johnny, and her sister Mary predeceased her. She is survived by her son Michael Hanke, his wife Ann Marshall, and their children Sean and Marshall Hanke of Amherst, MA, Bruce’s wife Rebecca Ward, and her son’s Henry and Charlie Ward Hanke of Norfolk, CT, and also several nieces and nephews. Millie’s funeral will be held on Saturday, Nov. 10th, at 10:00 AM in the PACIOREK FUNERAL HOME, 13 Hoosac St. Adams. Rev. Steven Montesanti, Pastor of the Parish of St. John Paul II, Adams, will officiate. Burial will follow in Bellevue Cemetery, Adams. Calling hours are Saturday from 9 AM until the service, at the funeral home. Flowers are welcomed, as Millie loved them. She did not like Lilies! In lieu of flowers donations can be made in her name to the Humane Society.

Mildred &#8220;Millie&#8221; Hanke (Kryston) of East Road in Adams passed away unexpectedly on November 1, 2018. She was born on June 20, 1932 to Josephine (Golebiowski) and Peter Kryston of North Adams. Millie reminisced about growing up on... View Obituary & Service Information

The family of Mrs. Mildred "Millie" Hanke created this Life Tributes page to make it easy to share your memories.

Send flowers to the Hanke family.