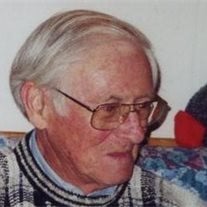 Michael F. McAndrews, 83, of 412 Fox Den Circle, Naples, Florida, and Mile Stretch Road, Fortune's Rocks, Maine, a well respected longtime Adams businessman and community leader, died early Tuesday morning at Naples Community Hospital in Naples, Florida. He was a longtime former resident of Orchard Street in Adams. He was born in Adams on September 19, 1922, a son of the late Michael J. and Josephine (Tenczar) McAndrews. Following the death of his mother at an early age, he was raised by his stepmother, the late Veronica (Gebarowski) McAndrews. He attended Adams schools, and graduated from the former Adams High School, where he was a star athlete, playing basketball, football and baseball. He had also played semi-pro basketball with the former St. Thomas and St. Stanislaus Church League teams. He attended Manhattan College in New York City, leaving his studies to enter the military during World War II. Mr. McAndrews served with the Headquarters Battery, 100th Infantry Division Artillery of the US Army in the European Theater from 1942 until his honorable discharge as a Technician 4th Grade in 1946. Upon his return from military service, Mr. McAndrews went to work for his late uncle, former State Sen. James P. McAndrews, at the former McAndrews Insurance Agency in Adams. He eventually purchased the business and acquired several smaller agencies in Adams and Cheshire, over the next several years. In 1962, he merged the agency with the Smith Bros. Insurance Agency, forming the Smith Bros.-McAndrews Insurance Agency, at which time Mr. McAndrews became treasurer, and longtime employee Hilaire Blanchette became president. Upon Mr. Blanchette's retirement in 1973, Mr. McAndrews' son, Bruce, joined the business. Michael McAndrews continued to operate the agency until retiring in 1990, when he sold the business to his son and Bernard Pinsonnault, who continue to operate it today. The agency celebrated its 100th anniversary in 1996. He was a licensed real estate agent, and co-owned Bruce Realty. He was a communicant of the Parish of Notre Dame & St. Thomas Aquinas, Adams, and had served as a lector for many years at St. Thomas Aquinas Church. He was a member and Past President of the Adams Lions Club; a Life Member of Adams Lodge 1335 of the Benevolent and Protective Order of Elks; a member of Adams Post 160 American Legion, Forest Park Country Club, and Taconic Golf Club, Williamstown, MA. He was a former Trustee of North Adams Regional Hospital, the former W.B. Plunkett Memorial Hospital, Adams, and the former Berkshire Bank & Trust Co. in Adams. He was a member of the Professional Insurance Agents Association; the Massachusetts Independent Insurance Agents Association; and was a Director and Past President of the former Berkshire County Insurance Agents Association. He was also part of a group that was instrumental in returning full-time physicians to Adams again following the closing of the Plunkett Hospital. He especially enjoyed golfing and sports. He is survived by his wife of 57 years, the former Doris B. Steuer, whom he married on January 17, 1948; 1 son - Bruce M. McAndrews of Adams; 1 Brother - Owen B. McAndrews and his wife, Jean, of Ft. Myers, Florida; 3 Sisters - Joan Ryczek and Barbara Meczywor, both of Adams; and Deidre Sanderson and her husband, Dale, of Hudson, MA; 1 Sister -in-Law - Nancy Cwalinski and her husband, Walter "Sonney" Cwalinski of Bonita Springs, Florida; 1 Brother in Law - William Steuer and his wife, Jeanne, of North Adams, MA; and several nieces, nephews, grandnieces, grandnephews, and cousins. He was predeceased by 2 sisters - Jean Pitroff and Josephine "Gerri" McAndrews. The funeral will be held on Monday, Nov. 7th, at 9:00 AM from the Auge`-Paciorek-Simmons Funeral Home, 13 Hoosac St. Adams, MA, followed by a Liturgy of Christian Burial at 10:00 AM in St. Thomas Aquinas Church, Adams, celebrated by his cousin, Rev. James F. McAndrews, SJ. Burial will follow in Bellevue Cemetery, Adams. Calling hours are Sunday from 4 to 7 PM at the funeral home. Flowers may be sent, or memorial donations may be made to the Multiple Myeloma Research Foundation or to any charity of the donor's choice, through the funeral home.

The family of Michael McAndrews created this Life Tributes page to make it easy to share your memories.

Send flowers to the McAndrews family.