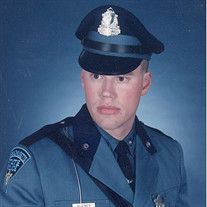 Michael J. Kleiner, 47, of Adams, died Friday evening, February 15, 2019, at Berkshire Medical Center in Pittsfield. He was born in Rochester, NY on December 7, 1971, a son of Emil J. Kleiner, Jr. and Sandra D. (Galley) Kleiner. He attended schools in the Freetown/Lakeville (MA) Regional School District, and graduated from Freetown/Lakeville Regional High School. He attended Berkshire Community College in Pittsfield, and earned his Bachelor’s degree from the former North Adams State College. Michael graduated from the Massachusetts State Police Academy, and served as a Trooper with the Massachusetts State Police from 2000 until 2016, when he incurred a line of duty injury that forced his retirement. Earlier, he worked as a patrolman with the Adams Police Department, and had served an internship with the North Adams Police Department. He had also worked as an armed security officer at the Yankee Rowe Atomic Energy Plant, and had also been a driver for Domino’s Pizza. He attended St. Stanislaus Kostka Church, Adams, and was an avid car enthusiast. He is survived by his mother and stepfather, Sandra D.and Richard G. Kleiner, of Adams; his father and stepmother, Emil “Spike” Kleiner, Jr. and his wife, Barbara, of Middleborough, MA; his brother, Robert B. Kleiner and his wife, Theresa, of Stroudsburg, PA; his two nieces, Brynn and Zoey; as well as several aunts, uncles and cousins. A Liturgy of Christian Burial will be concelebrated on Saturday, Feb. 23rd, at 12 Noon in St. Stanislaus Kostka Church, 25 Hoosac St. Adams, by Rev. Steven Montesanti, Pastor, and Rev. A. Peter Gregory, Pastor Emeritus of St. Charles Church, Pittsfield. Burial will be private. Calling hours will be held Saturday morning from 10:00 AM until 12 Noon IN ST. STANISLAUS KOSTKA CHURCH. In lieu of flowers, memorial donations may be made to the Adams Ambulance Service, 185 Columbia St. Adams, MA 01220; or to Pop Cares, PO Box 482, Williamstown, MA 01267. The PACIOREK FUNERAL HOME, Adams, is in charge of arrangements. To leave a message of condolence, please go online to www.paciorekfuneral.com

The family of Michael J. Kleiner created this Life Tributes page to make it easy to share your memories.

Send flowers to the Kleiner family.