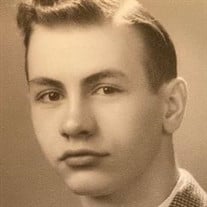 Michael W. Conlon passed away peacefully on February 17, 2020 at the North Adams Commons after living most of his adult life in Cheshire, MA. He was born on October 5, 1931, the son of former North Adams Police Chief Michael W. Conlon and Mary (Caron) Conlon. Mike was a graduate of the 1948 class of St. Joseph’s High School in North Adams and served in the United States Army, stationed in Germany for the Korean War from 1951 until receiving his Honorable Discharge in 1953. After testing out at many employers such as Jack & Harry’s, General Electric and Arnold Print Works, he last worked as a Union Rep and chemical emulsion specialist at Anken/General Photo/Rhone Pollanc in Williamstown. Mike loved Cadillac cars, Myers Rum, boating, fishing and floral gardening. He enjoyed many trips to the Bahamas, Florida and Aruba. In his later years he was often found at the Adams Dunkin Donuts or the Red Carpet having coffee and enjoying lively debates with anyone willing. He loved all types of animals but especially Sam the cat. He was an unrelenting tease with sarcasm and sassiness. Mike leaves his loving wife with 61 years of memories, the former Marion Louise Bishop, whom he married on July 31, 1959. He also leaves one daughter, Shelley Anne (Conlon) Cristofolini and her husband Martin; two granddaughters, Kelley (Guyarsz) Wood and her husband Jason and Katelyn Marie (Cristofolini) Raimer and her husband Ben; two step granddaughters, Ashley Gilvey and her husband Brandon and Lynsey Cristofolini and one sister-in-law, Shirley Emerson and her husband Robert. He enjoyed getting to spend time with all five of his great grandchildren, Reese October, Rylan Autumn, Nolan Edward, Carson James and Hadleigh Lynn. He also leaves four nieces and two nephews. Mike was predeceased by his daughter Linda Marie Conlon who died in 1974 and by his sister, Margaret “Peg” Wing (husband Joe) who died on the same date as Mike in 2016, and by sister and brother-in-law Patricia and Fred Bishop. A memorial service will be held on Sunday, February 23rd at 7:00 P.M. in the PACIOREK FUNERAL HOME, 13 Hoosac St., Adams, officiated by Rev. Steven Montesanti, Pastor of the Parish of St. John Paul II, Adams. Burial will be private in the spring in Cheshire Cemetery. Calling hours are Sunday from 5:30 P.M. until the time of the service at the funeral home. Memorial donations may be made to the North Adams Commons Patient Activities Fund, 175 Franklin St., North Adams, MA 01247.

Michael W. Conlon passed away peacefully on February 17, 2020 at the North Adams Commons after living most of his adult life in Cheshire, MA. He was born on October 5, 1931, the son of former North Adams Police Chief Michael W. Conlon and Mary... View Obituary & Service Information

The family of Mr. Michael W. Conlon created this Life Tributes page to make it easy to share your memories.

Send flowers to the Conlon family.