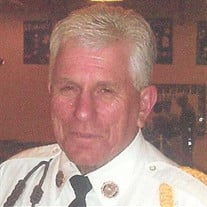 Matthew J. Wilk, Jr., 73, of Adams, died early Friday morning, June 7, 2019, at Berkshire Medical Center in Pittsfield. He was born in Adams on January 27, 1946, son of the late Matthew and Blanche (Krzanik) Wilk, and attended Adams schools, graduating from the former St. Joseph High School, North Adams. Matt worked at the Berkshire Gas Co. for 38 years, until retiring as a senior service technician. Following his retirement, he operated his own natural gas service company, Matty Gas, for several years. Earlier, he had worked at the former Sprague Electric Co. in North Adams for several years. Matt served as a Selectman for the Town of Adams for three terms, and was active in town affairs. He was a member of Company M of the Massachusetts National Guard in Adams for 21 years, retiring as Platoon Sergeant of the Scout Platoon. He was a member of Adams Post 160 American Legion, where he served on the Honor Guard; a member of the Company M Combat Support Club, the Maple Grove Civic Club and the Adams Democratic Town Committee. His wife, the former Francine M. Reynolds, whom he married on October 8, 1966, died on February 1, 2001. He is survived by his daughter, Amy Macca and her husband, David, of Pleasantville, NY; his son, Jonathan Wilk of Granby, MA; and two grandsons, David L. Macca, Jr. and Christopher F. Macca, both of Pleasantville, NY. He was predeceased by his sister, Elaine Murach, in 2005. The funeral will be held on Monday, June 10th, at 11:00 AM from the PACIOREK FUNERAL HOME, 13 Hoosac St. Adams, followed by a Liturgy of Christian Burial at 12 Noon in St. Stanislaus Kostka Church, Adams. Burial will follow in Bellevue Cemetery, Adams. Calling hours are Sunday afternoon from 2 until 4 PM at the funeral home. Memorial donations may be made to the Adams Post 160 Honor Guard, 160 Forest Park Ave. Adams, MA 01220. To leave a message of condolence, please go online to www.paciorekfuneral.com

The family of Mr. Matthew J. Wilk Jr. created this Life Tributes page to make it easy to share your memories.

Send flowers to the Wilk family.