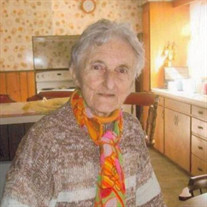 Mrs. Mary Frances Antonette (Tassone) Richards, 92, of North Adams, died Tuesday morning, October 5, 2021, at Springside of Pittsfield. She was born in North Adams on May 13, 1929, a daughter of the late Vincent A. and Margaret (Morocco) Tassone, and attended North Adams schools, graduating from Drury High School with the Class of 1946. Mary worked as a typist in the shipping department at Waverly Fabrics in Adams for 35 years, until retiring in 1991. Following her retirement, she worked part-time at Cascade School Supply Co. in North Adams for several years. She was a communicant of St. Elizabeth of Hungary Church and the former St. Anthony of Padua Church, North Adams. She enjoyed cooking, gardening, and was an avid Red Sox fan. Her husband, James W. Richards, whom she married September 29, 1951, died on December 12, 2011. She is survived by her daughter, Pamela Kidder and her husband, Tom, of Adams; two sisters, Viola Tassone of North Adams, and Madeline Paciorek of Adams; two granddaughters, Scarlett Rajbanshi and her husband Sanjeev, of Melrose, MA; and Kimberly Sprague and her husband Neil Sprague, Jr. of Adams; three great grandchildren, Damon, Macy and Zoe; as well as several nieces, nephews, grandnieces and grandnephews. She was predeceased by a son, James W. Richards, Jr. on Nov. 19, 1953; a grandson, Daniel E. Kidder on June 22, 1987; her brother Vincent A. Tassone, Jr. on Dec. 4, 2014, and a brother who died in infancy on May 25, 1927. The funeral will be held on Tuesday, Oct. 12th, at 9:45 AM from the PACIOREK FUNERAL HOME, 13 Hoosac St. Adams, followed by a Liturgy of Christian Burial at 11:00 AM in St. Elizabeth’s Church, North Adams. Burial will follow in Bellevue Cemetery, Adams. Calling hours are Monday from 4 to 7 PM at the funeral home. Memorial donations may be made to Elder Services of Berkshire County, 877 South St. Pittsfield, MA 01201. To leave a message of condolence, or for directions, please go online to www.paciorekfuneral.com

Mrs. Mary Frances Antonette (Tassone) Richards, 92, of North Adams, died Tuesday morning, October 5, 2021, at Springside of Pittsfield. She was born in North Adams on May 13, 1929, a daughter of the late Vincent A. and Margaret (Morocco) Tassone,... View Obituary & Service Information

The family of Mrs. Mary F. Richards created this Life Tributes page to make it easy to share your memories.

Send flowers to the Richards family.