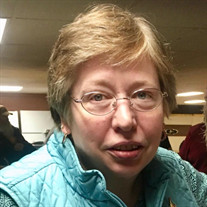 Miss Mary Ellen Norcross, 57, of Adams, died on Friday, April 15, 2022, at Berkshire Medical Center in North Adams. She was born in North Adams on November 29, 1964, daughter of the late Murray C. Norcross, Sr. and Judith (Voigt) Norcross. She attended schools in Adams and graduated from Hoosac Valley High School with the class of 1982. She had also taken classes at Berkshire Community College and McCann. Miss Norcross worked for many years as a certified nursing assistant having been last employed at the former Willowood Nursing Home. She was a communicant of the Parish of St. John Paul II in Adams and had been a longtime communicant of the former St. Thomas Aquinas Church, Adams. She was a member of the Quilting Club at the Adams Senior Center and the Franklin Chapter Order of the Eastern Star. She is survived by her three brothers, Dr. Murray C. Norcross, Jr., MD of Rhode Island, Lawrence E. Norcross of Manchester, NH and Robert W. Norcross of Adams. She also leaves four nieces and nephews, Monica, Nathan, Emily and Dillan. The funeral will be held on Wednesday, April 20th at 10:00 A.M. in the PACIOREK FUNERAL HOME, 13 Hoosac St., Adams. Burial will follow in Bellevue Cemetery, Adams. Calling hours are Wednesday from 9:00 A.M. until the time of the service at the funeral home. Memorial donations may be made to the Berkshire Humane Society, 214 Barker Rd., Pittsfield, MA 01201.

The family of Miss Mary Ellen Norcross created this Life Tributes page to make it easy to share your memories.

Send flowers to the Norcross family.