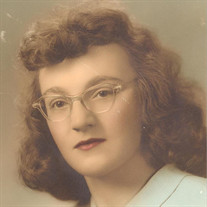 Mrs. Loretta Jane (Kolodziej) Rysz Vinette, 89, born on July 27, 1930, daughter of the late Henry and Celia (Pliszka) Kolodziej, passed away peacefully on Tuesday, February 25, 2020. She was born, raised and lived in Adams her entire life, graduating from the former Adams High School with the class of 1948. Working in mills and housekeeping for many private clients, she married Walter Rysz on November 25, 1948 and raised her four children, Gerald, Ronald, Kenneth and Lisa with hard work and perseverance. She loved gardening, from vegetables to flowers and even trees. She was a lifelong communicant of the Parish of St. John Paul II at St. Stanislaus Kostka Church, Adams, and was a member of the St. Stanislaus Rosary Sodality as well as part of the St. Stanislaus Kostka Vigil to keep the church open. Loretta enjoyed many years bowling at the Saints Hall with the ladies many a Friday night. Later in life she built her retirement home where she lived the rest of her days surrounded by loved ones, spending time with her grandchildren and great grandchildren baking cookies and playing bingo. She is survived by two sons, Kenneth Rysz of Adams and Gerald Rysz and his wife Terry of Florida, MA; her daughter, Lisa Rysz of Adams; three brothers, Raymond Kolodziej of Pittsfield, Frederick Kolodziej of Easthampton and Robert Kolodziej of Oakdale, CT; three grandchildren, Jonathan, Amy and Jackson; two great grandchildren, Victor and Jillian and many nieces and nephews. She was predeceased by her son Ronald Rysz who died in October and by her sister Dorothy Frieri and her brother Charles Kolodziej who died in World War II. The funeral will be held on Monday, March 2nd at 10:30 A.M. from the PACIOREK FUNERAL HOME, 13 Hoosac St., Adams, followed by a Liturgy of Christian Burial at 11:00 A.M. in St. Stanislaus Kostka Church, Adams, celebrated by Rev. Steven Montesanti, Pastor. Burial will follow in St. Stanislaus Cemetery. Calling hours are Monday morning from 9:00 A.M. until 10:30 A.M. at the funeral home. Members of the St. Stanislaus Rosary Sodality will meet at the funeral home at 8:45 A.M. to pay their respects and recite the Rosary. Memorial donations may be made to the Parish of St. John Paul II for the St. Stanislaus Steeple Fund, P.O. Box 231, Adams, MA 01220.

The family of Mrs. Loretta Rysz Vinette created this Life Tributes page to make it easy to share your memories.