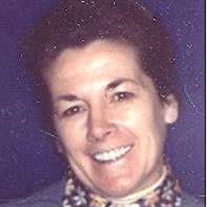 Mrs. Lenore R. (Harrington) Brooks, 91, formerly of Savoy, died Monday morning, June 18, 2018, at Berkshire Place in Pittsfield. She was the wife for 54 years of the late Jeddie P. Brooks, whom she married on February 18, 1950. Mr. Brooks died on August 9, 2004. She was born in Covington Township, PA on July 4, 1926, a daughter of the late Orville and Lottie (Fitzroy) Harrington. She came to Adams as a child, and attended Adams schools. She then lived in Savoy for over 50 years, until moving to Pittsfield several years ago. Lenore worked for a time at the former Sprague Electric Co. in North Adams, and was a “hometown” reporter for the former North Adams Transcript newspaper. She was a top-notch berry picker and antique bottle digger, a pastime she enjoyed with her sister Honey. Lenore loved cooking and baking, and she was an avid jam/jelly and pickle maker. Lenore also made homemade root beer and produced jam for Hancock Shaker Village. Skiing was a major part of the Brooks family life and every winter she would spend weekends and school holidays at Otis Ridge Junior Ski Camp in Otis, MA where she was a counselor and instructor with her husband and children. Camping with her sisters and brothers-in-law, especially at the Cape, was an annual tradition in the early years of Lenore and Jeddie’s marriage; later they would travel to a camp in Franklin, Maine, with their children and friends from her husband’s army years and Ski Camp. Jeddie and Lenore were both active members of the 10th Mountain Association and traveled the country to meetings and reunions. She always looked forward to summer trips that would take the family down to Florida and west to Milwaukee. These trips provided an abundance of historical education Jeddie Sr. planned months in advance. She will be dearly missed by family and friends both far and near. She was a communicant of the former St. Thomas Aquinas Church, Adams, and was a former member of the Hoosac Valley Motorcycle Club. She had also served as an Election Officer for the Town of Savoy for 30 years. Lenore is survived by her daughter, Cathrine Brooks-Sanginetti and her husband, Michael, of Pittsfield; two grandchildren, Nicholas Sanginetti of Pittsfield, and Carly Sanginetti of Manhattan; two sisters, Agnes Bugbee and Evelyn “Honey” Teot; as well as many nieces, nephews, grandnieces and grandnephews. She was predeceased by her son, Rev. Jeddie P. Brooks, who died on Feb. 4, 2014; her brothers Verne, Ervin and Lyle; and her sisters Dorothy, Nola, Lois and Doris. The funeral will be held on Saturday, June 30th, at 11:00 AM in the PACIOREK FUNERAL HOME, 13 Hoosac St. Adams. Deacon Gregory LaFreniere of the Parish of St. John Paul II will officiate. Calling hours will be held on Saturday, June 30th from 10:00 AM until the time of the service, in the funeral home. Burial will be held at a later date in the Massachusetts Veterans Memorial Cemetery in Agawam. Memorial donations may be made to HospiceCare in the Berkshires, 877 South St. Pittsfield, MA 01201. To leave a message of condolence, please go online to www.paciorekfuneral.com

The family of Mrs. Lenore R. Brooks created this Life Tributes page to make it easy to share your memories.

Send flowers to the Brooks family.