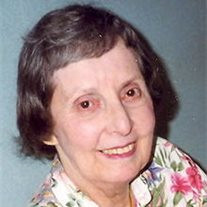 Mrs. Lauretta M. (Jones) Loughman, 82, of 1 Berkshire Square, Adams, formerly of Northampton and Chicopee, died Thursday, July 12, 2007, at her home. She was born in Northampton on May 29, 1925, daughter of the late David and Yvonne (Brais) Jones. She attended St. Michael's Elementary and High Schools in Northampton. Mrs. Loughman was primarily a homemaker, but had worked as a waitress and bookkeeper following her graduation in 1942. She married her husband James M. Loughman on May 15, 1948, and together they resided in Chicopee for 54 years. Following the death of her husband on November 23, 2002, she moved to Adams to be with her son and his family. While in Chicopee she was a communicant of St. Patrick's Church, and was most recently a communicant of St. Stanislaus Kostka Church, Adams. In addition to spending time with her family, Lauretta enjoyed cooking, reading, television, shopping, and the fine art of conversation. She is survived by her beloved son James R. Loughman and his wife Robin of Adams. 4 Grandchildren - Zoe, Martin, Alicia, and Thomas Loughman, all of Adams. 1 Brother-in-Law - Richard Loughman and his wife Elizabeth of Springfield, and several cousins, nieces, and nephews. The funeral will be held on Tuesday July 17, at 9:00AM from the PACIOREK Funeral Home, 13 Hoosac St., Adams, followed by a Liturgy of Christian Burial at 10:00AM in St. Stanislaus Kostka Church, Adams. Burial will follow in St. Mary's Church Cemetery, Northampton. Calling hours are Monday from 4:00PM to 7:00PM at the funeral home. Memorial donations may be made to the St. Stanislaus Kostka School through the funeral home.

Mrs. Lauretta M. (Jones) Loughman, 82, of 1 Berkshire Square, Adams, formerly of Northampton and Chicopee, died Thursday, July 12, 2007, at her home. She was born in Northampton on May 29, 1925, daughter of the late David and Yvonne (Brais)... View Obituary & Service Information

The family of Lauretta M. Loughman created this Life Tributes page to make it easy to share your memories.

Send flowers to the Loughman family.