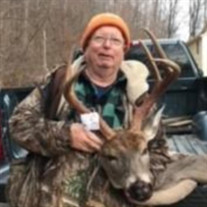 Kurt Francis Herrmann, age 72, of Adams, born December 22, 1947, son of Paul K. Herrmann and Florence Chamberlain Herrmann, died at Berkshire Medical Center in Pittsfield December 11, 2020 after a short illness. He was a 1965 graduate of the first graduating class of McCann Technical-Vocational High School, where he was Salutatorian of his class. He worked for Shapiro Chevrolet as a car mechanic, then as a motorcycle mechanic for Ronnie’s Cycles, and later North’s Services, and after retirement, for his brother Bob at H & R Machine Company as a machinist. He served in the National Guard from 1967-1973 and was honorably discharged with the rank of Sergeant. He was one of the founders of Adams Outdoorsmen for Youth, where he helped organize, run, and provide fish and game for their Annual Game Suppers to raise funds for college scholarships. He was well known for his skill in preparing game dishes such as caribou stew, and for his German kuchen and splitterkuchen pastries. He was also a member of the Cheshire Rod and Gun Club. He was an avid big game hunter, from Ungava Bay in Canada to the Rocky Mountains in New Mexico, and many points in between. He successfully hunted for caribou, moose, elk, bear, wild boar, and white-tailed deer. He also enjoyed fishing for salmon and brown trout on Lake Ontario, fishing for small mouth bass on the Quabbin Reservoir, and trout fishing on Windsor Pond, and regaled his friends and relatives with tales of his hunts and travels. He gave freely of his time to help anyone who needed a hand, and to encourage and teach the upcoming generations of hunters and fishermen safety skills for the sports he loved. He was a wonderful friend to all and never had an unkind word to say. He will be greatly missed by everyone. He was predeceased by his wife, Beatrice Soucie Herrmann, who died January 27, 2016, to whom he was devoted. He is survived by his children, Richard Brown (Jane) and grandchildren Scotty and Casey Brown of Atlanta, GA; Diane Sowle (Dan) of Cheshire and grandchildren Danielle Sowle of Dunwoody, GA, and Travis (Victoria) Sowle of Little Elm, TX; David (Janice) Brown and grandchildren Nathan and Lauren Brown of Adams. He was predeceased by son Scott “Chuck” Brown, who died in 2012, and is survived by daughter-in-law Tracey Brown of Cheshire. He also leaves his brother Robert Herrmann (Mary Ann) of Savoy, nephew Timothy Herrmann (Heather Levy) and their children Isaac and Rachael Herrmann of Adams, and niece Alicia Herrmann of Lenox. He is also survived by his sister Margaret Rotti (Lawrence) of Pittsfield, nephew Richard Rotti (Jenine Moro) of Pittsfield, and niece Rebecca Rotti-Tougas (George”Twice”Tougas) and their sons Camden and Luke Tougas of Marion, MA. There will be no calling hours. Per Kurt’s wishes there will be a Celebration of Life at a later date when conditions permit. In lieu of flowers, memorial contributions may be made in his name to Adams Outdoorsmen for Youth, P.O. Box 122, Adams, MA 01220, or to Hospice Care in the Berkshires, 877 South Street, Pittsfield, MA 01201.

Kurt Francis Herrmann, age 72, of Adams, born December 22, 1947, son of Paul K. Herrmann and Florence Chamberlain Herrmann, died at Berkshire Medical Center in Pittsfield December 11, 2020 after a short illness. He was a 1965 graduate of the... View Obituary & Service Information

The family of Mr. Kurt F. Herrmann created this Life Tributes page to make it easy to share your memories.

Send flowers to the Herrmann family.