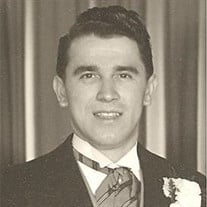 Julian F. Lipinski, 92, of Adams, passed away on Wednesday, October 30, 2019 at Berkshire Medical Center in Pittsfield where he had been admitted a week earlier. He was born in Adams on Upper East Hoosac Street on August 19, 1927 to John and Josephine (Cwalinski) Lipinski, both parents being immigrants from Poland during World War I. He grew up during the great depression on the east side of Adams and never left, raising his family on East Road where he lived for the last 62 years. He graduated from the St. Stanislaus Kostka Grammar School and then the Adams Memorial High School with the class of 1945. He soon started work at General Electric Company in Pittsfield, retiring after 40 years of service in the power transformer division. He was a lifelong communicant of St. Stanislaus Kostka Church and he was a proud member of the historic vigil to keep open the church for mass and services. Over the years he enjoyed polka dancing, bowling, skiing, fishing, scratch tickets and most of all, spending time with his family at countless get-togethers. He leaves behind his devoted wife of 67 years, the former Helen Danforth, who lovingly and unendingly cared for her husband, especially for the last seven years after he suffered a debilitating stroke. He also leaves behind three children; his daughter Christine Duquette (James Duquette); two sons, David (Geeta Thapa) and John (Rebecca Weisman); three grandchildren, Lindsey Duquette Brown (Tyler Brown), Joshua Lipinski (Jacque Pierce) and Pranam Lipinski; one great grandchild, Abbey Brown and many nieces, nephews, neighbors and friends. He was predeceased by his parents, sisters, Rosie Alibozek, Stella Blazejewski and Genevieve Kolodziej as well as his brothers, Benedict, Frank and Stephen. The funeral will be held on Wednesday, November 6th at 10:30 A.M. from the PACIOREK FUNERAL HOME, 13 Hoosac St., Adams, followed by a Liturgy of Christian Burial at 11:00 A.M. in St. Stanislaus Kostka Church, celebrated by Rev. Steven Montesanti, Pastor. Burial will follow in St. Stanislaus Kostka Cemetery. Calling hours are Wednesday morning from 9:30 A.M. to 10:30 A.M. at the funeral home. Memorial donations may be made to St. Stanislaus Kostka Church, P.O. Box 231, Adams, MA 01220 or to Hospice Care in the Berkshires, 877 South St., Pittsfield, MA 01201.

Julian F. Lipinski, 92, of Adams, passed away on Wednesday, October 30, 2019 at Berkshire Medical Center in Pittsfield where he had been admitted a week earlier. He was born in Adams on Upper East Hoosac Street on August 19, 1927 to John and... View Obituary & Service Information

The family of Mr. Julian F. Lipinski created this Life Tributes page to make it easy to share your memories.

Julian F. Lipinski, 92, of Adams, passed away on Wednesday, October...

Send flowers to the Lipinski family.