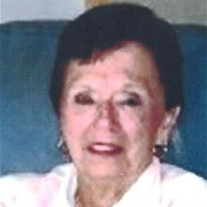 Mrs. Joyce (Morgan) McGrath, 88, of Ormond Beach, Florida, died Friday, August 9, 2019, at her granddaughter’s home in Cheshire, where she resided for the past several months. She was born in Pittsfield on September 28, 1930, daughter of the late William C. and Jessie (McKenzie) Morgan. She attended schools in Cheshire and graduated from the former Adams High School with the Class of 1948. She lived in Cheshire until moving to Florida 27 years ago. Mrs. McGrath last worked as a supervisor in the Ordnance Division of General Electric in Pittsfield, until retiring after 28 years of service. She had been a member of the First Baptist Church of Cheshire. Her husband, Francis T. McGrath, whom she married on November 27, 1948, died on May 22, 1982. She is survived by her daughter, Sandra Lamb and her husband, Robert, of Cheshire; six grandchildren, including Kelly Akroman and her husband, Paul, with whom she resided; Kyle Lamb, Shawn McGrath, Corey McGrath, Bryony McGrath and Amanda Driscoll; 16 Great Grandchildren; 1 Great Great Grandchild; her longtime friend William Melle; and many nieces and nephews. She was predeceased by her son, Wayne McGrath, who died July 26, 1983. Funeral services and burial will be private. There are no calling hours. To leave a message of condolence for Joyce’s family, please go online to www.paciorekfuneral.com

Mrs. Joyce (Morgan) McGrath, 88, of Ormond Beach, Florida, died Friday, August 9, 2019, at her granddaughter&#8217;s home in Cheshire, where she resided for the past several months. She was born in Pittsfield on September 28, 1930, daughter... View Obituary & Service Information

The family of Mrs. Joyce M. McGrath created this Life Tributes page to make it easy to share your memories.

Send flowers to the McGrath family.