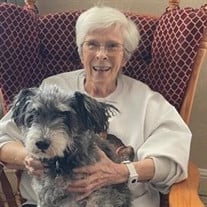 Mrs. Joyce Marie (Gardner) Beauchemin, 85, of Adams, died on Thursday, July 1, 2021, at Mt. Greylock Extended Care Facility in Pittsfield. She was born in Adams on June 16, 1936, daughter of the late Bernard and Marcelline (Fillion) Gardner. She attended schools in Adams and graduated from the former Adams High School with the class of 1954. Mrs. Beauchemin worked as a secretary for the former Berkshire Fuel Company until her retirement. Earlier she had worked for the former James Hunter Machine Company and the former Arnold Print Works. She was a communicant of the Parish of St. John Paul II at Notre Dame des Sept Douleurs Church, Adams, where she had been a longtime member of the Ladies of St. Anne. She was also a member of the Adams Seniors. She is survived by her husband, Richard L. Beauchemin, Sr., whom she married on October 8, 1955; two sons, Richard L. Beauchemin, Jr., and his wife Christine of New York and Mark Beauchemin and his wife Shari of North Adams; one daughter, Michelle Jennings of Springfield; a brother Thomas Gardner and his wife Diane of North Carolina; eight grandchildren, three great grandchildren and many nieces and nephews. She was predeceased by a brother Bernard Gagne. A Liturgy of Christian Burial will be celebrated on Friday, July 9th at 10:00 A.M. in Notre Dame des Sept Douleurs Church, McKinley Square, Adams. Burial will follow in Bellevue Cemetery, Adams. There are no calling hours. Joyce wouldn’t want anyone to be sad she has died but would like everyone to do something happy and think of her while doing it. Memorial donations can be made to the Alzheimer’s Association, 264 Cottage St, Springfield, MA 01104.

The family of Mrs. Joyce M. Beauchemin created this Life Tributes page to make it easy to share your memories.

Send flowers to the Beauchemin family.