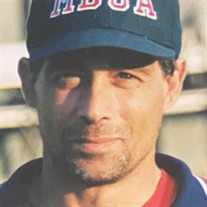 Mr. Joseph Anthony Pansecchi, 58, of Adams, died Friday morning, February 18, 2022, at Berkshire Medical Center in Pittsfield. He was born in Pittsfield on February 27, 1963, a son of Marijane (McAndrews) Pansecchi and the late Charles Pansecchi. He attended Adams schools, graduating from Hoosac Valley High School with the Class of 1981. Joe worked for Unistress Corp. in Pittsfield for many years, until ill health forced his retirement. He had also worked for the Berkshire Eagle for several years. He had coached Babe Ruth Baseball in Adams and North Adams for many years, and coached the JV baseball team at Mt., Greylock Regional High School. He also served as an umpire for Babe Ruth ball games and was a member of the Massachusetts Baseball Umpires Association. He had been a member of the Adams Turners and the Forest Park Country Club in Adams. He enjoyed sports, bowling and golfing. Besides his mother, of Adams, he is survived by his daughter, Alison Pansecchi and her fiancé, Josh Atwell, of Adams; his son, Anthony Pansecchi of Adams; his brother, Adams Fire Chief John Pansecchi and his wife, Sandra, of Adams; his sister, Anne Marie Long and her husband, Greg, of Miramar Beach, FL; as well as several nieces and nephews. Besides his father, he was predeceased by his former wife, Jean Phaneuf. Funeral services will be held on Wednesday, Feb. 23rd, at 7:00 PM in the PACIOREK FUNERAL HOME, 13 Hoosac St. Adams. Calling hours will be Wednesday from 5:00 PM until the service, at the funeral home. It is requested that anyone attending services wear a face mask while inside the funeral home. Burial will be in the spring. Memorial donations may be made to the North Adams Babe Ruth League through the funeral home. To leave a message of condolence, please go online to www.paciorekfuneral.com

The family of Mr. Joserph A. Pansecchi created this Life Tributes page to make it easy to share your memories.

Send flowers to the Pansecchi family.