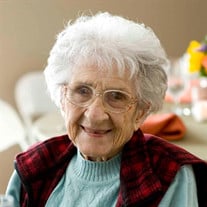 Josephine Marie Vaught, formerly of Mystic, Ct. died in Stamford, Vt. on February 22, 2019. She was born November 28, 1914 to Italian immigrant parents in North Pelham, N.Y. She was the eldest daughter of 11 children, fifth born. Her three sisters preceded her in death as have six of her brothers. She contracted tuberculosis in her right knee after a fall, at the age of 4 years. She was separated from her family and cared for at the New York State Hospital for the Care of Crippled and Deformed Children, in West Haverstraw, N.Y. until 1928. At the age of 13 she returned to her family. She graduated from public schools in Mount Vernon, N.Y. and completed her business education in New York City. In 1943 she met Navy Warrant Officer Charles F. Vaught on a train near New Haven, Ct. when he offered her his seat. They married in Vallejo, CA June 29, 1944, while the submarine Charles served on was in dry dock. Four children came from their union; Andrea, John, Marylou, and Charles, Jr. (Chuck). Charles retired from the USN in 1959, with 22 years of service. Being a sailor’s wife, Josephine learned early on how to cope with long periods of separation. Her longest separation began in 1986 after Charles’ death. She is survived by her brother, Anthony, her children; Andrea (Bill), John (Susan), Marylou (Stewart), Chuck (Carole), 12 grandchildren, 14 great-grandchildren and many beloved nieces and nephews. She has lived with her daughter Mary and her husband, Stewart since 2014 Josephine’s firm Christian convictions guided her throughout her adult life. She wanted to leave you with a Bible passage she relied upon. Matthew 11: 28-30 Come to Me, all you who labor and are heavy laden, and I will give you rest. Take My yoke upon you and learn from Me, for I am gentle and lowly in heart, and you will find rest for your souls. For My yoke is easy and My burden is light. The family would like to thank Dr. Benjamin Rudin and Dr. Donald Mead and their medical staffs for the kindness and care given to mom, Hospice (VNH) of New Hampshire and Vermont, and her wonderful caregivers; Kathy, Jeanne, Priscilla, Jody, and Sally . A grave side service at Elm Grove Cemetery will be held Wednesday, February 27, at 2:00 p.m.

The family of Mrs. Josephine Marie Vaught created this Life Tributes page to make it easy to share your memories.

Send flowers to the Vaught family.