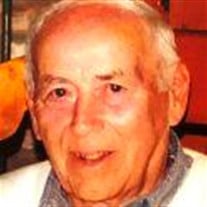 Mr. Joseph Arthur Roulier, 90, of Adams, died Tuesday morning, June 26, 2018, at the Holyoke Soldier’s Home. He was born in Adams on July 17, 1927, a son of the late Eugenor and Corinne (Boisvert) Roulier. He attended Notre Dame Elementary School and graduated from the former Adams High School with the Class of 1945. He was a veteran of World War II, serving with the US Navy aboard the USS Colorado from 1945 until 1946, when he was Honorably Discharged as a Seaman First Class Following his Navy service, Joe attended UMASS, where he received his degree in Civil Engineering in 1950. He worked as a bridge inspector for the Massachusetts Department of Public Works until his retirement in 1988. He was a communicant of the Parish of St. John Paul II at Notre Dame des Sept Douleurs Church, Adams, and was a member of Adams Post 160 American Legion. He and his late wife, Dorothy, travelled extensively and enjoyed wintering in Eustis, Florida. Joe enjoyed doing crossword puzzles, attending Mass, and playing extensive golf throughout Berkshire County. He was a very hard worker, surveyor, and handy man who could fix anything. He was a happy, friendly, and sociable gentleman. He was a dedicated husband, father, and grandfather. His wife, the former Dorothy H. Rolnick, whom he married on May 19, 1962, died on January 28, 2018. They will be buried together. He is survived by his three sons, Stephen Roulier and his girlfriend, Lori Schick, of Southwick, MA; David Roulier and his wife, Sharlene, of Framingham, MA; and Paul Roulier of Rehoboth, MA; five grandchildren, Stephanie, Sarah, Brienne, Joshua and Noah; four step grandchildren, Kayleigh, Thomas, Jayme and Mary; three step great grandchildren, and several nieces and nephews. He was predeceased by his three sisters, Irene Cosgrove, Loretta Willis and Jeanne Donahue. The funeral will be held on Saturday, July 7th, at 10:15 AM from the PACIOREK FUNERAL HOME 13 Hoosac St. Adams, followed by a Liturgy of Christian Burial celebrated at 10:30 AM in Notre Dame des Sept Douleurs Church, Adams, celebrated by Rev. A. Peter Gregory, Pastor Emeritus of St. Charles Church, Pittsfield. Burial will follow in Bellevue Cemetery, Adams. Calling hours will be Saturday morning from 9:30 until 10:15 AM in the funeral home. Memorial donations may be made to any charity of your choice.

The family of Mr. Joseph A. Roulier created this Life Tributes page to make it easy to share your memories.

Send flowers to the Roulier family.