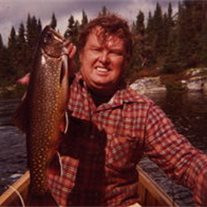 Joseph Anthony Rodovick, 72, of 30 Grove St. Adams, died Sunday afternoon at Baystate Medical Center in Springfield, MA. He was born in Adams on March 8, 1933, son of the late Joseph and Adrienne (Kuza) Rodovick. He attended Adams schools, and graduated from the former Adams High School in 1951. While at Adams High, he was a member of its basketball team that won the Western Massachusetts Championship in 1950, and went on to play at Boston Garden. Mr. Rodovick was a veteran of the Korean conflict, serving with the US Navy from 1951 until 1955. Mr. Rodovick worked at Pfizer in Adams from 1956 until retiring as quarry foreman in 1991. He was a member of Dr. George L. Curran Post 996 Veterans of Foreign Wars, North Adams, and was a member of Waubeeka Golf Club in Williamstown. He enjoyed golfing, hunting and fishing. He is survived by his wife of 50 years, the former Nancy A. Hilton, whom he married on August 20, 1955; 1 son - Joseph J. Rodovick and his wife, Linda, of Stamford, VT; 2 Daughters - Julie A. Rodovick of Adams, and Jean A. Rodovick of Larkspur, California; 1 Brother - Edward A. Rodovick of Adams; 1 Sister - Helen Monette of North Adams; 2 Grandsons - Matthew and Mark Rodovick, of Stamford, VT; and several nieces & nephews. Private Funeral services will be held on Thursday, Oct. 27th, at 9:00 AM in the AUGE-PACIOREK-SIMMONS Funeral Home, 13 Hoosac St. Adams. Burial will follow in Bellevue Cemetery, Adams. There are no calling hours. Memorial donations may be made to the Adams Ambulance Service, or to the Veterans Outreach, through the funeral home.

The family of Joseph A. Rodovick created this Life Tributes page to make it easy to share your memories.

Send flowers to the Rodovick family.