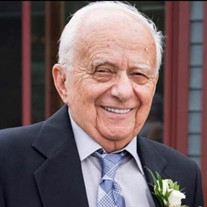 Mr. Joseph C. Ordyna, 96, of Adams, died Saturday afternoon, March 20, 2021, at his home, surrounded by his family. He was born in Adams on August 11, 1924, a son of the late John and Felicia (Mikuszewski) Ordyna, and attended Adams schools. He was a veteran of World War II, serving with the US Army. Joe last worked in the Ordnance division of General Electric Co. in Pittsfield until retiring. Earlier, he had worked at the former Connie’s Cleaners and Adams Bakery. He was a communicant of the Parish of St. John Paul II at St. Stanislaus Kostka Church, Adams. He was a member and Past President of the St. Stanislaus Kostka Society, a member of St. Michael’s Society, the Maple Grove Civic Club and the former East Hoosac Athletic Association. He enjoyed fishing, bowling, golfing, woodworking, and was a fan of the Boston Red Sox. He especially enjoyed spending time with his grandchildren and great granddaughters, and annual trips to Ohio to visit family for many years. His wife, the former Mildred A. “Mimi” Duda, whom he married on August 11, 1951, died on August 20, 2011. He is survived by his daughters, Diane Donaghey and Christine Girgenti, both of Adams; his grandchildren, Aaron Girgenti and his wife Erica; Alicia Malone and her husband, Vincent; and Ashley Oladehin and her husband, Olawale, all of Adams; his great granddaughters, Tressa Girgenti and Ella Malone, of Adams; as well as several nieces, nephews, grandnieces and grandnephews. He was predeceased by his sons-in-law, Alfio Girgenti and Edgar Donaghey; his four brothers, including Adolph, Casimer and Stephen Ordyna and Matthew Ciempa; and his three sisters, including Angela Gilbert, Jennie Haczela and Stacia Pasternak. The funeral will be held on Wednesday, March 24th, at 9:00 AM from the PACIOREK FUNERAL HOME, 13 Hoosac St. Adams, followed by a Liturgy of Christian Burial at 10:00 AM in St. Stanislaus Kostka Church, Adams, celebrated by Rev. William F. Cyr, Administrator. Burial will follow in St. Stanislaus Cemetery, Adams. Calling hours are Tuesday from 5 to 7 PM at the funeral home. Due to current regulations, use of face masks and social distancing will be strictly enforced at the funeral home, church and cemetery. Memorial donations may be made to the Adams Council on Aging, 3 Hoosac St. Adams, MA 01220, or to HospiceCare in the Berkshires, 877 South St. Pittsfield, MA 01201. To leave a message of condolence, please go online to www.paciorekfuneral.com

Mr. Joseph C. Ordyna, 96, of Adams, died Saturday afternoon, March 20, 2021, at his home, surrounded by his family. He was born in Adams on August 11, 1924, a son of the late John and Felicia (Mikuszewski) Ordyna, and attended Adams schools.... View Obituary & Service Information

The family of Mr. Joseph C. Ordyna created this Life Tributes page to make it easy to share your memories.

Send flowers to the Ordyna family.