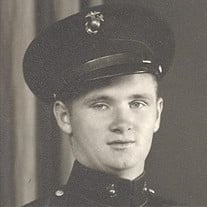 Mr. Joseph John Alibozek, 89, of Adams, died on Friday, June 15, 2018 at his home surrounded by his family. He was born in Adams on August 16, 1928, a son of the late Frank and Aniela (Struzik) Alibozek. He attended schools in Adams. Mr. Alibozek was a Veteran of the Korean Conflict having served with the United States Marine Corps. until receiving his Honorable Discharge as Sergeant on May 25, 1952. Mr. Alibozek last worked for the former David Krutiak Construction Co., as a welder mechanic until retiring. Earlier he had worked for Petricca Construction Co. and at Bear Swamp Power in Rowe, MA. He had also worked full time on the family farm where he had built his own barn and garage. He was a communicant of the Parish of St. John Paul II at St. Stanislaus Kostka Church, Adams. He was a former member of the Adams Sno Drifters and the former Adams Pigeon Club. He was an avid hunter and fisherman and enjoyed mushrooming, gardening and bee keeping. He is survived by his wife of 65 years, the former Theresa H. Krzanik, whom he married on August 16, 1952; two daughters, Susan King and her husband Peter of Cheshire, Joan Kleiner and her husband Craig of Cheshire; two sons, Joseph Alibozek, Jr., and his partner Debbie DiGirolamo of Cheshire and John Alibozek and his wife Brenda of Adams; five grandchildren, Christopher DeGrenier, Dr. Jennifer McGrath-DeGrenier, and Bryan and Benjamin Kleiner and Cameron Alibozek; six great grandchildren and many nieces and nephews. He was predeceased by eight brothers, John, Ned, Chester, William, James, Leon, Fred and Edward Alibozek and by four sisters, Mildred Zieba, Laura Winarski, Wanda Ostrobinski and Jenny Taikowski. The funeral will be held on Monday, June 18th at 9:00 A.M. from the PACIOREK FUNERAL HOME, 13 Hoosac St., Adams, followed by a Liturgy of Christian Burial at 10:00 A.M. in St. Stanislaus Kostka Church, Adams. Burial will follow in St. Stanislaus Kostka Cemetery, Adams. Calling hours are Sunday from 4:00 P.M. to 7:00 P.M. at the funeral home. Memorial donations may be made to Hospice Care in the Berkshires, 877 South St., Pittsfield, MA 01201 or to St. Stanislaus Kostka School, 108 Summer St., Adams, MA 01220.

Mr. Joseph John Alibozek, 89, of Adams, died on Friday, June 15, 2018 at his home surrounded by his family. He was born in Adams on August 16, 1928, a son of the late Frank and Aniela (Struzik) Alibozek. He attended schools in Adams. Mr.... View Obituary & Service Information

The family of Mr. Joseph John Alibozek created this Life Tributes page to make it easy to share your memories.