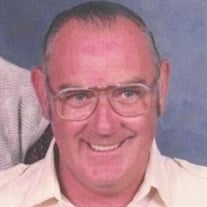 Mr. John V. Moran, 86, of Adams, died Saturday evening, January 15, 2022 at Berkshire Medical Center in Pittsfield. He was born in North Adams on January 5, 1936, a son of the late Arthur J. Moran, Sr. and Evelyn Mae (Aubertine) Moran, and attended St. Joseph Elementary and High Schools, North Adams. John was a carpenter by trade and had worked for several local contractors. He last worked for Cardan Construction Co., as a carpenter, before retiring. In earlier years he had worked as an auto mechanic and a concrete mixer driver. He was a communicant of St. Stanislaus Kostka Church, Adams, where he was an active participant during the vigil to keep the church open during its closure. He enjoyed woodworking, auto repair, small engine repair and gardening. He was also very fond of animals, and will be missed by his feline friend, Toby. His wife of 64 ½ years, the former Catherine S. Oparowski, whom he married on June 22, 1957, died on January 5th. He is survived by his daughter, Debbie Moran (Christopher) of Adams, his son, David Moran (Joan) of Cheshire, and several nieces, nephews, grandnieces and grandnephews. He was predeceased by his brothers Edward, Arthur Jr., Charles and Thomas Moran, his step brother Frank Brooks, and by his sister, Evelyn Moran. Funeral services for both John and Catherine will be held on Saturday, Jan. 22nd, at 10:00 AM from the PACIOREK FUNERAL HOME, 13 Hoosac St. Adams, followed by a Liturgy of Christian Burial at 10:30 in St. Stanislaus Kostka Church, Adams. Burial will follow in St. Stanislaus Cemetery. Calling hours are Saturday morning from 8:30 until 10:00 AM in the funeral home. Wearing of face masks will be required at the funeral home and church. Memorial donations may be made to St. Stanislaus Church, 21 Maple St. Adams, MA 01220, or to St. Stanislaus School, 108 Summer St. Adams, MA 01220. To leave a message of condolence, please go online to www.paciorekfuneral.com

The family of Mr. John V. Moran created this Life Tributes page to make it easy to share your memories.

Send flowers to the Moran family.