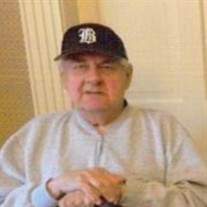 Mr. John W. “Ticker” Gelheiser, Jr., 82, of Adams, died on Tuesday, July 14, 2020 at Berkshire Medical Center in Pittsfield. He was born in Adams on June 21, 1938, a son of the late John and Helen (Hanlon) Gelheiser. He attended schools in Adams. Mr. Gelheiser was a Veteran of the Vietnam Era, having served with the United States Air Force until receiving his Honorable Discharge as Airman Second Class on July 26, 1962. Ticker worked for many years as a machine operator for the former Pfizer Co., Adams, until his retirement. Earlier he had worked for the former Arnold Print Works, Adams. He was a communicant of the Parish of St. John Paul II, Adams. He was a member of the Mountain Club and Adams Post 160 American Legion. He was the “King of the Pranks”, playing pranks and jokes on everyone. He had been a longtime coach for Babe Ruth Baseball and the Adams Church League Basketball and was an avid softball player and Boston sports fan. He and his wife enjoyed many trips to Lake George, NY. He is survived by his wife of 58 years, the former Margaret “Peg” Balardini, whom he married on June 23, 1962; his son, John W. Gelheiser, III and his wife Penny of South Glens Falls, NY; his daughter Lisa Albareda of Adams; three grandsons, Stephen and Zachary Albareda and Charles Gelheiser and by many nieces and nephews. He was predeceased by his son-in-law, Stephen “Yumpa” Albareda and by his siblings, James “Jigs” Gelheiser, Judith Adamczyk and Jean Ryan. The family would like to thank the staff of Williamstown Commons Unit 2 for the wonderful care the provided. A graveside service will be held on Monday, July 20th at 10:00 A.M. in Bellevue Cemetery, Adams. Calling hours are Sunday from 2:00 P.M. to 5:00 P.M. at the PACIOREK FUNERAL HOME, 13 Hoosac St., Adams. Due to current state and local regulations, all attending must wear a face mask and practice social distancing. We kindly ask anyone attending to be patient, as admittance to the funeral home may take a bit longer than usual. These restrictions also apply to the cemetery service. Memorial donations may be made to the Adams Post 160 American Legion, 160 Forest Park Ave., Adams, MA 01220.

The family of Mr. John "Ticker" Gelheiser, Jr. created this Life Tributes page to make it easy to share your memories.

Send flowers to the Gelheiser, family.