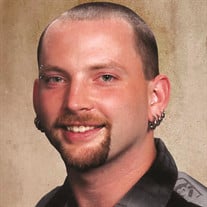 John H. “Bean” Arigoni, Jr., 39, of North Adams, died on Monday, October 7, 2019 at Berkshire Medical Center in Pittsfield. He was born in North Adams on May 22, 1980, son of John H. Arigoni and Donna Bourdon. He attended schools in North Adams and graduated from the Charles H. McCann Technical High School. He then attended Berkshire Community College. At the time of his death, John was working for Cascade School Supply in North Adams. John also owned the After-Hours Laundromat. His time spent there was not work to him, but an opportunity to converse with his many friends and patrons. John’s greatest passion was well known among his friends and family. He loved Jeeps. He loved to restore and ride them off-road with his friends. Each year he looked forward to “Muddersday”, an annual ride for off-road enthusiasts. John was very handy and was considered an expert taper. If you were lucky, he heard you needed him and would be quick to offer assistance. Similarly, his mechanical skills were relied on by many. In keeping with John’s loving and generous spirit, it was his decision to donate life so others may live it. Five recipients and their families received the precious news that they would be receiving lifesaving transplants due to John’s generosity. The family would like to acknowledge and thank the North Adams Ambulance and the staff at Berkshire Medical Center for their loving care of John. John always looked on the bright side and would wish you do the same. He would want you to remember his generosity and kindness. He would want all of his friends and family to know how much you meant to him. Besides his father of Clarksburg and mother of Barnstable he is survived by his maternal grandparents, Rene` and Marilyn (Haley) Bourdon of Adams; two sisters and many aunts, uncle, nieces, nephews and cousins. He was predeceased by his paternal grandparents, Mr. and Mrs. Roger Arigoni and by his brother Jason Arigoni who died on June 30, 2019. A Liturgy of Christian Burial will be celebrated on Saturday, October 19th at 11:00 A.M. in Notre Dame des Sept Douleurs Church, McKinley Square, Adams, celebrated by Rev. Steven G. Montesanti, Pastor. Burial will be private for the family at a later date. Calling hours are Friday, from 4:00 P.M. to 7:00 P.M. at the PACIOREK FUNERAL HOME, 13 Hoosac St., Adams. Memorial donations may be made to the Northern Berkshire EMS, P.O. Box 1045, North Adams, MA 01247

The family of John H. Arigoni Jr. created this Life Tributes page to make it easy to share your memories.

Send flowers to the Arigoni family.