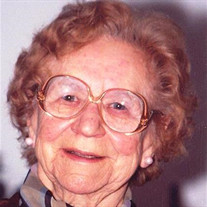 Mrs. Jennie S. (Blazejewski) Twardowski, 101, of Adams, died early Wednesday morning, January 16, 2019, at Williamstown Commons. She was born in Adams on June 24, 1917, a daughter of the late Frank and Aniela (Potla) Blazejewski, and attended Adams schools. Jennie worked at the former Berkshire Fine Spinning Co., and the former Adams Super Markets, Mat’s Cleaners and Schiff Clothing, all in Adams, until retiring. She was a communicant of St. Stanislaus Kostka Church, Adams, where she was a member of its Rosary Sodality and St. Cecelia’s Choir; and was active in many church and school activities. Her husband, Charles Twardowski, whom she married on November 19, 1938, died on March 24, 1966. She is survived by her two sons, Charles Twardowski and his wife, Jeannette, of Adams, and Francis Twardowski and his partner, Cathy Canales, of Savoy; five grandchildren, Brenda Kronick, Timothy Twardowski, Krista Avery, Lynn Twardowski and Susan Condron; 8 great grandchildren; and many nieces, nephews, grandnieces and grandnephews. She was predeceased by her brothers, Walter, John, Theodore and Mathew Blazejewski; and by her sisters, Mary Misiuk and Katherine Kondej. The funeral will be held on Saturday, January 19th, at 10:00 AM from the PACIOREK FUNERAL HOME, 13 Hoosac St. Adams, followed by a Liturgy of Christian Burial at 11:00 AM in St. Stanislaus Kostka Church, Adams, celebrated by Rev. Steven Montesanti, Pastor. Burial will follow in St. Stanislaus Kostka Cemetery, Adams. There are no calling hours. To leave a message of condolence, please go online to www.paciorekfuneral.com

The family of Mrs. Jennie S. Twardowski created this Life Tributes page to make it easy to share your memories.

Send flowers to the Twardowski family.