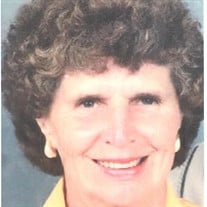 Mrs. Jeannette A. (Boucher) Heideman, 92, of Clarksburg, died on Friday, December 14, 2018 at North Adams Commons. She was born in North Adams on May 22, 1926, a daughter of the late Armand and Edith (LaBombard) Boucher. She attended schools in North Adams. Jeannette worked as a Teletype Operator for the former Waverly Fabrics in Adams for over forty years, retiring on June 20, 1987. She was a communicant of the former St. Francis of Assisi Church, North Adams. Following her retirement, she and her husband spent many years at their winter home in Naples, FL. She loved cooking, dancing, singing and partying with all her friends and family. She was a very active person and worked side by side her husband. Her husband, Adolph Heideman, whom she married on August 9, 1947, died on September 9, 2007. She is survived by her daughter, Kathy Viens Heideman of Pittsfield; by her son, James Heideman of North Adams; seven grandchildren, Brian, Kevin and Eric Heideman, Haley Dunham, Beth Pause, Danny Viens and Carlyle Chesbro; five great grandchildren, Aliyah Heideman, Cameron Dunham, Evan Dunham, Dominick Pause and Amelia Heideman; and by many nieces and nephews. She was predeceased by five brothers; Bernard, Roland, Albert, Alfred and William Boucher and by two sisters; Rita Rowley and Lillian Schwenck. The funeral will be held on Tuesday, December 18th at 9:00 A.M. from the PACIOREK FUNERAL HOME, 13 Hoosac St., Adams, followed by a Liturgy of Christian Burial at 10:00 A.M. in Notre Dame des Sept Douleurs Church, McKinley Square, Adams, celebrated by Rev. Steven Montesanti, Pastor. Burial will be in the spring in Clarksburg Cemetery. Calling hours are Monday from 4:00 P.M. to 7:00 P.M. at the funeral home. Memorial donations may be made to the North Adams Commons Patient Activities Fund, 175 Franklin St., North Adams, MA 01247.

Mrs. Jeannette A. (Boucher) Heideman, 92, of Clarksburg, died on Friday, December 14, 2018 at North Adams Commons. She was born in North Adams on May 22, 1926, a daughter of the late Armand and Edith (LaBombard) Boucher. She attended schools... View Obituary & Service Information

The family of Mrs. Jeannette A. Heideman created this Life Tributes page to make it easy to share your memories.

Send flowers to the Heideman family.