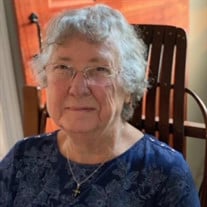 Mrs. Jeanne (Jeanton) McDonough, 85, of Adams, died on Monday, May 31, 2021, at Berkshire Medical Center in Pittsfield. She was born in North Adams on January 18, 1936, a daughter of the late Fred and Elizabeth (Cassidy) Jeanton. She attended schools in North Adams and graduated from Drury High School with the class of 1953. She then graduated from Becker Junior College. Mrs. McDonough worked for many years as a front-end clerk for the former Price Chopper Supermarket in North Adams until her retirement at the age of 70. She was a communicant of the Parish of St. John Paul II at Notre Dame des Sept Douleurs Church, Adams. She was a member of the French Circle in North Adams and was a member of the Drury High School Class of 1953 Reunion Committee. She loved trips to the beach, playing cribbage with her grandchildren, watching the Red Sox, and a good glass of Chardonnay. Most especially, though, she cherished the time spent in the company of her large family. Her husband, Robert McDonough, whom she married on October 6, 1956, died on March 16, 2001. She is survived by three daughters, Kathleen Strange and her husband Steven of Naperville, IL, Mary Alarie and her husband Brian of Adams and Jacqueline McDonough and her partner David Bartolf of Bear, DE; three sons, Michael McDonough and his wife Jann of Hoosick Falls, NY, Thomas McDonough and his wife Carla of North Adams and Paul McDonough and his wife Karen of North Adams; two sisters, Alice Jarisch and Maryellen Dean, both of North Adams; and by thirteen grandchildren, seven great grandchildren and many nieces and nephews. She was predeceased by her brother, Alfred Jeanton. The funeral will be held on Saturday, June 5th at 9:00 A.M. from the PACIOREK FUNERAL HOME, 13 Hoosac St., Adams, followed by a Liturgy of Christian Burial at 10:00 A.M. in Notre Dame des Sept Douleurs Church, McKinley Square, Adams. Burial will follow in Southview Cemetery, North Adams. Calling hours are Friday from 5:00 P.M. to 7:00 P.M. at the funeral home. Memorial donations may be made to Elder Services Meals on Wheels, 877 South St., Pittsfield, MA 01201.

Mrs. Jeanne (Jeanton) McDonough, 85, of Adams, died on Monday, May 31, 2021, at Berkshire Medical Center in Pittsfield. She was born in North Adams on January 18, 1936, a daughter of the late Fred and Elizabeth (Cassidy) Jeanton. She attended... View Obituary & Service Information

The family of Mrs. Jeanne J. McDonough created this Life Tributes page to make it easy to share your memories.

Send flowers to the McDonough family.