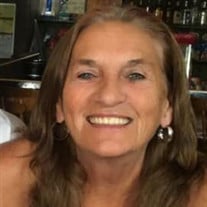 Jean E. (Gelheiser) Ryan, 64, of Adams, died on Sunday, April 7, 2019 at Williamstown Commons. She was born in Adams, on March 2, 1955, a daughter of the late John and Helen (Hanlon) Gelheiser. She attended schools in Adams and graduated from Hoosac Valley High School with the class of 1974. Jean last worked for many years at the Red Carpet Restaurant in Adams. Earlier she had worked at the Adams Pizza House and had been a home daycare provider. Jean was the life of the party, meeting and making friends anywhere she went. Her door and front porch were always open to friends and family. In her younger years she was a member of softball and bowling leagues. She enjoyed playing Bingo and the challenges of gambling. She is survived by her two sons; Patrick Ryan and his wife Jess of Dalton and Jason Ryan and his wife Karla of Adams; eight grandchildren, Hayden, whom she resided with and raised, and Emma, Addie, Kiara, Elijah, Austin, Alex and Connor; two brothers, James Gelheiser and his wife JoAnne of Adams and John Gelheiser and his wife Margaret of Adams; her former husband, John Ryan and many nieces, nephews and close friends. She was predeceased by her daughter, Kelly Ryan and by her sister Judith Adamczyk. The funeral will be held on Thursday evening at 6:00 P.M. in the PACIOREK FUNERAL HOME, 13 Hoosac St., Adams, celebrated by Rev. Steven Montesanti, Pastor of the Parish of St. John Paul II, Adams. Burial will be private for the family at a later date. Calling hours are Thursday from 3:00 P.M.until the time of the service in the funeral home. The family requests the omission of flowers and suggests memorial donations be made to a charity of the donor’s choice.

Jean E. (Gelheiser) Ryan, 64, of Adams, died on Sunday, April 7, 2019 at Williamstown Commons. She was born in Adams, on March 2, 1955, a daughter of the late John and Helen (Hanlon) Gelheiser. She attended schools in Adams and graduated from... View Obituary & Service Information

The family of Jean E. Ryan created this Life Tributes page to make it easy to share your memories.

Send flowers to the Ryan family.