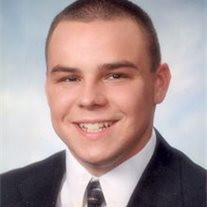 Jason Michael Houran, 25, of 34 Brown St. Adams, died Thursday afternoon at North Adams Regional Hospital, shortly after being admitted. He was born in Bennington, Vermont on June 7, 1981, a son of Edward J. Houran and Joanne (Bell) Houran Brooks, and moved to Adams as a child. He attended Adams schools, and Graduated from Hoosac Valley High School with the Class of 2000. He also attended Berkshire Community College in Pittsfield, and worked for a time as an apprentice electrician. He had also served with the United States Marine Corps for a short period. Mr. Houran had worked with Adams Trucking Co. of Adams for the past year and a half. Earlier, he had worked for several years with Applied Energy Management Corp. where he traveled extensively for the company. He was a member of the Adams Lodge of Elks and the North Adams Men's Softball League. While in high school, he played on the football team, and had been active in youth baseball and basketball leagues his whole life. He enjoyed all sports, including fishing and NASCAR racing, and music, but was especially fond of his family and friends. He is survived by his mother and stepfather, Joanne and Kenneth Brooks, of Adams; His father and stepmother, Edward and Rosemary Houran of Bennington; His son - Brennan Houran and his mother, Nicole LeBeau and her family, of Adams; 4 Sisters - Heather Rondeau and her husband, Peter, of Adams; Emily Brooks of Adams; and Nicole Houran and Amy Keenan, both of Bennington, VT; 1 brother - Vincent Keenen of Bennington, VT; His maternal grandparents - Suzanne Cook and her companion, William Bradley, of North Adams; and Dr. John Bell and his wife, Carolyn, of Doylestown, PA; His paternal grandfather - Edward P. Houran of Bennington, Vermont; 2 nephews - Alexander and Bryan Rondeau, both of Adams; as well as many aunts, uncles & cousins throughout the country. He was predeceased by his paternal grandmother, Mrs. Helen Houran. A memorial service celebrating Jason's life will be held on Wednesday, August 2nd, at 6:00 PM in the AUGE-PACIOREK-SIMMONS Funeral Home, 13 Hoosac St. Adams. Warren Scamman, Pastor of the United Methodist Church of Cheshire will officiate. Relatives and friends are invited to attend. Memorial donations may be made to the Brennan Houran Trust Fund through the funeral home.

The family of Jason M. Houran created this Life Tributes page to make it easy to share your memories.

Send flowers to the Houran family.