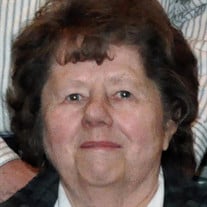 Mrs. Jane Marie (Menard) Burdick, 89, of Adams, died on Wednesday, April 6, 2022, at her home. She was born in Adams on July 31, 1932, daughter of the late Henry and Alice (Oslizlo) Menard. She attended schools in Adams and graduated from the former Adams High School. Mrs. Burdick last worked for the H.A. George Fuel Company in their former Adams location for many years as the office administrator until retiring in 1984. Prior to her retirement she worked for the former Sprague Electric Company and the former Waverly Fabrics. She was a fan of the arts with a great love for theater and music. She also enjoyed visiting Saratoga Springs and the Maine seashore. She is survived by her husband, William E. Burdick, Sr., whom she married on April 7, 1951; three sons, William E. Burdick, Jr. and his wife Marcia of Niskayuna, NY, Ronald Burdick and his wife Madeline of Adams, and Mark Burdick and his girlfriend Sharon Kielbasa of Burlington, CT; a daughter, Linda Miller of Harrisburg, NC; four grandchildren, Kelly Neibergall and her husband Thad, Christopher Miller, Shawn Burdick and his wife Bridget and Justin Burdick and his fiancé Emily O’Connell; four great grandchildren, Hayley Katz, Zoey Neibergall, Ava Burdick, Carter Burdick and by many nieces and nephews. She was predeceased by her brother Henry Menard, Jr. A graveside memorial service will be held on Wednesday, April 13th at 11:30 A.M. in Bellevue Cemetery, Adams. Calling hours at the PACIOREK FUNERAL HOME, 13 Hoosac St., Adams, will be held Wednesday morning from 10:00 A.M. to 11:00 A.M. The family kindly requests anyone attending, please wear a face covering. The family requests the omission of flowers and suggests memorial donations be made to the Adams Ambulance Service, 185 Columbia St., Adams, MA 01220 or to a charity of the donor’s choice.

Mrs. Jane Marie (Menard) Burdick, 89, of Adams, died on Wednesday, April 6, 2022, at her home. She was born in Adams on July 31, 1932, daughter of the late Henry and Alice (Oslizlo) Menard. She attended schools in Adams and graduated from the... View Obituary & Service Information

The family of Mrs. Jane M. Burdick created this Life Tributes page to make it easy to share your memories.

Send flowers to the Burdick family.