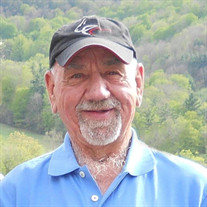 Mr. James Henry Hoellerich, 88, of Cheshire, died on Sunday, May 22, 2022 at his home surrounded by family and friends. He was born in Adams, a son of the late John and Lillian (Rupprecht) Hoellerich. He was predeceased by his wife of 45 years, Elizabeth “Bonnie” Bacon. He attended schools in Adams. Jim retired from the family dairy farm, Ayrhill Farms, in 2010. He was a veteran of the United States Army. Jim was a founding member of the Hoosac Valley Motorcycle Club and the Snodrifters. He was a top rider in the New England enduro racing circuit and enjoyed restoring trail bikes to display in his Museum of Vintage Trail Bikes. Jim was a long-term member of the Adams Agricultural Fair, AMA, BMW Owners of America, Yankee Beemers, RAMS, SMOG, and NETRA. He was a marshal at the 48th ISDT in Dalton, MA and enjoyed hosting reunion events at the farm. Jim was passionate about riding – some of his most memorable trips were to Germany, Alaska, Nova Scotia, and cross country on a vintage Ossa! He is survived by his two daughters, Melissa Hoellerich of Rutland, VT and Heidi Hoellerich Moulton of Vernon, CT; a brother, Roy Hoellerich of Cheshire; a sister, Ruth Hoellerich of Savoy; his treasured companion Barbara Bennett; Barb’s family; his best friend Ronald Ouimet and by many nieces, nephews and friends. He was predeceased by his son-in-law, John Moulton and by two brothers, George and William Hoellerich. The family would like to extend a big thank you to all the staff from Home Instead, At Home TLC, Kindred Care, and Hospice for their kind and compassionate care. A celebration of life will be held on Saturday, June 25th at 11:00 A.M. at 192 Henry Wood Rd., Cheshire, MA 01225. Anyone requiring seating is suggested to bring their own chair. A reception will follow. In lieu of flowers or donations the family suggests performing acts of kindness to one another and the Earth.

Mr. James Henry Hoellerich, 88, of Cheshire, died on Sunday, May 22, 2022 at his home surrounded by family and friends. He was born in Adams, a son of the late John and Lillian (Rupprecht) Hoellerich. He was predeceased by his wife of 45 years,... View Obituary & Service Information

The family of Mr. James H. Hoellerich created this Life Tributes page to make it easy to share your memories.

Send flowers to the Hoellerich family.