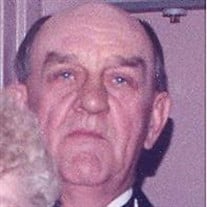 Mr. James R. “Jigs” Gelheiser, 78, of Adams, died on Monday, February 10, 2020 at his home. He was born in Adams on November 15, 1941, a son of the late John and Helen (Hanlon) Gelheiser. He attended schools in Adams and graduated from the former Adams High School. Mr. Gelheiser last worked for Specialty Minerals in Adams until his retirement. Earlier he had worked for the former Arnold Print Works. He was a communicant of the Parish of St. John Paul II, Adams. His wife, the former JoAnn Dean, died on May 11, 2019. He is survived by his four stepchildren Jeffrey Bissaillon and his wife Lorrie of Pittsfield, Joseph Bissaillon and his wife Ann of Adams, Bruce Bissaillon of Texas and Debbie Bohls of Texas; his brother, John Gelheiser and his wife Margaret of Adams; four step granddaughters, Brittney and Ashley Bissaillon and Amanda Waschak and Heather Choquette; three step great grandchildren, Destiny, Michaela and Brenden; and by many nieces and nephews. He was predeceased by his two sisters, Judith Adamczyk and Jean Ryan. The funeral will be held on Thursday, February 13th at 11:00 A.M. in the PACIOREK FUNERAL HOME, 13 Hoosac St., Adams. Burial will follow in Bellevue Cemetery, Adams. Calling hours are Thursday from 9:00 A.M. until the time of the service in the funeral home. Memorial donations may be made to Pop Cares, P.O. Box 482, Williamstown, MA 01267.

The family of Mr. James "Jigs" Gelheiser created this Life Tributes page to make it easy to share your memories.

Send flowers to the Gelheiser family.