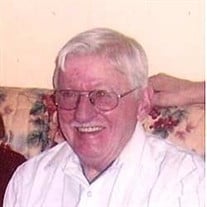 Mr. James B. “Jimmy” Dean, 82, of North Adams, died Tuesday morning, October 29, 2019, at Berkshire Medical Center in Pittsfield. He was born in Adams on June 16, 1937, a son of the late Joseph R. “Huck” Dean and Florence (Hennon) Dean. He attended Adams schools, and graduated from the former Adams High School with the Class of 1956. Jim was the owner and operator of the former Jimmy Dean’s Atlantic Service Center on Curran Highway in North Adams, which he opened in 1965. In 1978, he closed the garage and joined his son, Joe, in the operation of Dean’s Quality Auto in North Adams, and was active in the business until his passing. He was involved in the towing industry since 1965 and was a member of the Statewide Towing Association of Massachusetts for over 30 years. Earlier, he worked as a draftsman at General Electric Co. in Pittsfield; and at several local garages, including the former John Armstrong’s Texaco in Adams, and the former Dean’s Esso on Commercial St. in Adams, which was owned by his late brother, Joseph Dean, Jr. He had also assisted in the operation of his family’s farm on West Road in Adams for many years. Jim was a member of the Massachusetts Army National Guard for many years, serving with the 1059th Transportation Tactical Carrier Unit based at the Adams Armory, and had been assigned as a tank commander, eventually retiring as a Sergeant. He was a former member of the Adams Turners, and enjoyed fishing and sports, especially the Boston Red Sox, New England Patriots and Boston Celtics. He also enjoyed spending time with his close friends at Key West Lounge and State Street Tavern in North Adams. He is survived by his son, Joseph T. Dean and his wife, Debra, of Stamford, VT; two daughters, Lisa Lawson and her husband Kyle, of Adams; and Rebecca Noel, of Adams; six grandchildren, Joseph Dean, Jr., Katie Bishop, Kyle Lawson, Jr., Sarah Lawson, Irish Noel and Seven Noel; two great grandchildren, Olivia and Addison Dean; his former wife, Kathleen (Jamros) Curley of Adams, as well as several nieces, nephews, grandnieces and grandnephews. He was predeceased by his brothers, Joseph R. Dean, Jr. , John “Jack” Dean and William Dean, and by his sister, JoAnn Gelheiser. Jim’s family would like to thank the staff at Berkshire Medical Center, as well as the staff of Hospice Care in the Berkshires, for the wonderful care they provided to him in his final days. A celebration of Jim’s life will be held on Saturday, November 16th, from 1 until 4 PM at the Bounti Fare Restaurant, Howland Ave. (Rte. 8) Adams. Come as you are, it is a casual affair. Have a drink and share you best memories. All who knew him are welcome. Hope to see you there! Memorial donations may be made to Soldier On, 360 West Housatonic St. Pittsfield, MA 01201. The PACIOREK FUNERAL HOME, Adams, is in charge of arrangements. To leave a message of condolence, please go online to www.paciorekfuneral.com

The family of Mr. James B. Dean created this Life Tributes page to make it easy to share your memories.

Send flowers to the Dean family.