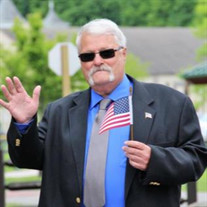 Mr. James R. Bush, 67, of Adams, died on Wednesday, September 9, 2020 at Berkshire Medical Center in Pittsfield. He was born in Pittsfield on August 25, 1953, a son of the late Gerald and Carol (Genovese) Bush. He attended schools in Adams and graduated from Hoosac Valley High School with the class on 1971. Mr. Bush worked as an analytical chemist for the former Pfizer Company in Adams, then for Specialty Minerals until his retirement in 2009 after 35 years. He was a communicant of the Parish of St. John Paul II at Notre Dame des Sept Douleurs Church, Adams. At the time of his death. Mr. Bush was serving as a selectman for the Town of Adams, a position he was elected to in 2018. He served as the Vice Chairman from 2019 to the present. As selectman he served on many subcommittees for youth programs, the department of public works, economic development and green energy and was the Northern Berkshire Solid Waste Management District Alternate Commissioner. He was very active with the Fallen Hero’s Flag Project and had served as the liaison to the Ad Hoc Committee on Solid Waste, Adams Arts Advisory Board, Board of Health, Cemetery Commission, Council on Aging, Friends of the Ashuwillticook Trail, Berkshire Scenic Railway, Northern Berkshire Community Coalition, Parks Commission, Prudential Committee and the Traffic Commission. He was a member of the Adams Sportsman for Youth, the Cheshire Rod & Gun Club, the Secretary for the Northern Berkshire Retirement Club, past president and member of the Adams Turners and the Berkshire Scenic Railway, where he was a conductor. He was a volunteer at local food banks in Adams and North Adams as well as a volunteer instructor for the “Matter of Balance” classes and was well known for playing Santa Claus at many local events, but especially on the Tinseliner Train. He was also the 2020 Martin Luther King Jr. Peacemaker Award recipient. He is survived by his wife, the former Patricia L. Bieniek, whom he married on May 10, 1975; his daughter, Amy Pratt and her husband Edward of Adams; his son, James R. Bush, Jr. and his fiancé Erin Lenski of Hinsdale; two brothers, Gerald Bush and his wife Nancy and Keith Bush and his companion Danielle Ballard, all of North Adams; a sister, Kimberly Long and her husband Pete of Salem, VA; five grandchildren, Hunter and Connor Pratt and Aiden, Mason and Elliot Bush; his beloved dogs Lexi and Buddy and by many nieces and nephews. A graveside committal service will be held on Monday, September 14th at 11:00 A.M. in Bellevue Cemetery. Calling hours at the PACIOREK FUNERAL HOME, 13 Hoosac St., Adams, are Sunday from 4:00 P.M. to 7:00 P.M. Due to current state and local regulations, all attending the calling hours or graveside service must wear a face mask and practice social distancing. We kindly ask anyone attending to be patient, as admittance to the funeral home may take a bit longer than usual. Memorial donations may be made to the Adams Council on Aging, 3 Hoosac St., Adams, MA 01220 or to Pop Cares, P.O. Box 482, Williamstown, MA 01267.

Mr. James R. Bush, 67, of Adams, died on Wednesday, September 9, 2020 at Berkshire Medical Center in Pittsfield. He was born in Pittsfield on August 25, 1953, a son of the late Gerald and Carol (Genovese) Bush. He attended schools in Adams... View Obituary & Service Information

The family of Mr. James R. Bush created this Life Tributes page to make it easy to share your memories.

Send flowers to the Bush family.