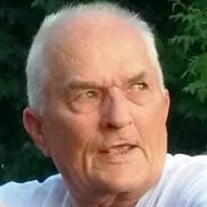 Mr. Henry Joseph “Junior” Zieba, Jr., 78, of Adams, died on Tuesday, July 24, 2018 at Berkshire Medical Center in Pittsfield. He was born in Adams on January 26, 1940, a son of the late Henry and Mildred (Alibozek) Zieba. He attended schools in Adams including St. Stanislaus Elementary and the former Adams High School. Mr. Zieba was a Veteran of the Vietnam War having served with the United States Navy in Cuba during the Cuban Missile Crisis. He received his Honorable Discharge on January 5, 1962. Mr. Zieba worked for over 50 years as a laborer for Local 473 Laborers Union until retiring. In his younger years he had worked for Burnett’s Farm and the former Brandon’s Farm. He was a communicant of the Parish of St. John Paul II at St. Stanislaus Kostka Church, Adams. He was a member of the Adams Post 160 American Legion, the Adams Outdoorsman for Youth and the Adams Hound and Hunt Club. He enjoyed gardening, hunting and fishing as well as making Beet Horseradish every year for family and friends. He was an avid Boston Red Sox and New England Patriots fan. He is survived by his wife of 56 years, the former Eileen Pizani; two sons, Bruce Zieba of Adams and Rob Zieba and his wife Wendy of North Adams; his daughter, Becky Tworig of Adams; six grandchildren, Jarrid, Brieanna and Krystal Zieba and Justyn, Conner and Brandon Tworig; his sister Dorothy Pelletier of Adams; a daughter-in-law, Kris Zieba; a son-in-law Jim Tworig; two great grand puppies Doc and Boone and many nieces and nephews. He was predeceased by three brothers, Chester, Joseph and Richard Zieba. A Liturgy of Christian Burial will be celebrated on Saturday, July 28, at 10:00 A.M. in St. Stanislaus Kostka Church, celebrated by Rev. A. Peter Gregory, Pastor Emeritus of St. Charles Church, Pittsfield. Burial will be private for the family at a later date. There are no calling hours. Memorial donations may be made to St. Stanislaus Kostka School, 108 Summer St., Adams, MA 01220 or to Hospice Care in the Berkshires, 877 South St., Pittsfield, MA 01201.

The family of Mr. Henry "Junior" Zieba Jr. created this Life Tributes page to make it easy to share your memories.

Send flowers to the Zieba family.