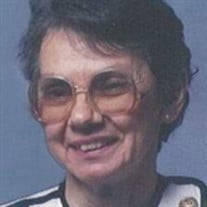 Mrs. Henrietta “Mickey” (Nowak) Skowronski, 91, of Adams, died on Friday, July 17, 2020 at her home. She was born in Adams, on May 29, 1929, a daughter of the late Henry and Mary (Mazur) Nowak. She attended schools in Adams and graduated from the former Adams High School with the class on 1947. She had also graduated from the former Pittsfield Vocational School of Practical Nursing in 1959. Mrs. Skowronski last worked on the Pediatric Unit at Berkshire Medical Center in Pittsfield until her retirement in 1985. Earlier she had done private home duty nursing, worked at the former Plunkett Memorial Hospital from 1960 to 1973 and the former General Electric Company in Pittsfield from 1949 to 1955. Her husband, Adam J. Skowronski, whom she married in St. Stanislaus Kostka Church, Adams on September 17, 1949, died on August 30, 2003. She is survived by her son, Peter Skowronski of Cheshire; two daughters, MaryAnn Provost and her husband Mark of Houston, TX and LynnMarie Stone and her husband Gregory of Elkhart, IN; seven grandchildren, Sean Provost of Austin, TX, Cody Provost and his wife Amanda of Dallas, TX, Joshua Stone of Miami, FL, Heidi and Melia Stone, both of Indianapolis, IN, Natasha Egelston and her husband Brian of Huntington Township, OH and Raymond Skowronski of Adams; six great grandchildren, Arabella Faith Egelston, Nathaniel Robert Egelston, Henrietta Grace Egelston, Rubin Adam Egelston, James Thomas Provost and Andrew Collin Provost; her sister, Jane Stavaski of Lenox and many nieces and nephews. She was predeceased by three brothers, Walter, Adam and William Nowak and by three sisters, Wanda Gale, Olympia Burke and Monica Biros. Funeral services and burial will be private for the family at a later date. There are no calling hours.

The family of Mrs. Henrietta "Mickey" Skowronski created this Life Tributes page to make it easy to share your memories.

Send flowers to the Skowronski family.