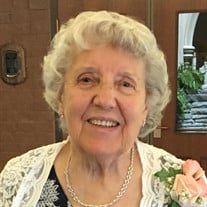 Mrs. Helen (Szufnarowski) O’Neil. 91, of Adams, died on Wednesday, October 13, 2021, at her daughters home in Slingerlands, New York. She was born in Adams on November 12, 1929, a daughter of the late Henry and Victoria (Kuropatwa) Szufnarowski. She attended schools in Adams and graduated from the former Adams High School. Mrs. O’Neil last worked for the former Waverly Fabrics in Adams until the mill closed. Earlier she had worked as a secretary in the naval ordnance division of General Electric in Pittsfield. She was a communicant of the Parish of St. John Paul II at St. Stanislaus Kostka Church, Adams. Her husband, James O’Neil, whom she married on November 26, 1959, died on October 25, 2017. She is survived by her son, Dennis O’Neil and his wife, Mary, of Montgomery, NJ; her daughter, Teresa Smolenski and her husband, Joseph, of Slingerlands, NY; five grandchildren, Jennifer Dezaio and her husband, Matt; Michael O’Neil, Alicia Noll and her husband Ken and Nicole and Matthew Smolenski; two great grandchildren, Isabella Dezaio and Aurora Noll, as well as many nieces and nephews. She was predeceased by three brothers, Thaddeus, Frederick and Anthony Szufnarowski and by five sisters, Celia Szufnarowski, Alice Lepak, Gladys Sirard, Sophie Brooks and Adele Szufnarowski. The funeral will be held on Friday, October 22nd at 11:30 A.M. from the PACIOREK FUNERAL HOME, 13 Hoosac St., Adams, followed by a Liturgy of Christian Burial at 12:00 Noon in St. Stanislaus Kostka Church, Adams. Burial will follow in St. Stanislaus Cemetery, Adams. Calling hours are Friday morning from 10:00 A.M. until 11:30 A.M. at the funeral home. Memorial donations may be made to St. Stanislaus Kostka School, 108 Summer St., Adams, MA 01220.

Mrs. Helen (Szufnarowski) O&#8217;Neil. 91, of Adams, died on Wednesday, October 13, 2021, at her daughters home in Slingerlands, New York. She was born in Adams on November 12, 1929, a daughter of the late Henry and Victoria (Kuropatwa) Szufnarowski.... View Obituary & Service Information

The family of Mrs. Helen O'Neil created this Life Tributes page to make it easy to share your memories.

Send flowers to the O'Neil family.