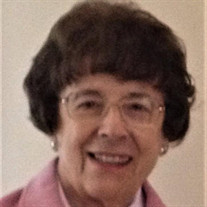 Helen Margaret Donega, 88, of North Adams, died Saturday morning, October 9, 2021, at North Adams Commons. She was born in North Adams on October 28, 1932, daughter of the late John and Teresa (Modena) Donega. She attended North Adams schools and graduated from Drury High School with the Class of 1950. She then received her Bachelor’s Degree in Chemistry from the University of Massachusetts. Helen worked as a chemist & supervisor for many years at the former Sprague Electric Co. in North Adams. She left her position to start Burgess Analytical Laboratories where she was Director of Analytical Services for over 30 years. Helen was also an instructor in the Chemistry Dept. at Williams College for many years. She last worked as a receptionist for the North Adams Council on Aging. She was a communicant of the former St. Anthony of Padua Church, North Adams. She enjoyed golfing, bowling, and taking photographs at the beaches of Maine. She was an accomplished painter and specialized in painting scenes from the many lighthouses in Maine. She also enjoyed the time she spent with her friends and working for the Council on Aging at the Mary Spitzer Senior Center in North Adams. She is survived by her brother, Carl A. Donega and his wife, Marcia, of Adams; her nieces Karen Nunez, Stephanie Kawa, Elizabeth Holbrook and Sherri Centra; her sister-in-law, Sharyn Donega of Winston-Salem, NC; and several grandnieces and grandnephews. She was predeceased by a brother, John P. Donega, in 2016. The funeral will be held on Saturday, Oct. 16th, at 9:30 AM from the PACIOREK FUNERAL HOME, 13 Hoosac St. Adams, followed by a Liturgy of Christian Burial at 10:30 AM in Notre Dame des Sept Douleurs Church, Adams. Burial will follow in Southview Cemetery, North Adams. Calling hours are Friday from 4 to 6 PM at the funeral home. It is requested that face coverings be worn for all services. Memorial donations may be made to the Friends of the North Adams Senior Center, 116 Ashland St. North Adams, MA 01247. To leave a message of condolence, or for directions, please go online to www.paciorekfuneral.com

The family of Miss Helen M. Donega created this Life Tributes page to make it easy to share your memories.

Send flowers to the Donega family.