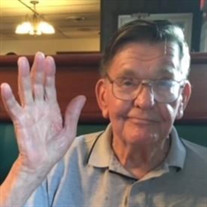 Mr. Harold R. Pitoniak, 97, of Williamstown, MA, formerly of Adams, MA died on Monday morning, August 9, 2021, at Williamstown Commons. He was born in Wilbraham, MA on April 19, 1924, son of the late John and Margaret (Blasczak) Pitoniak. He attended schools in Adams and North Adams, and also attended Charles H. McCann Technical High School. He went on to earn his First Class Engineer’s License, a Nuclear Power Plant Senior Supervising Engineer License and a Master’s Steam Fitting License. Mr. Pitoniak voluntarily served his country during World War II and joined the United States Army Air Corps 522nd Fighter Squadron in December 1942, which supported several locations (England, France, Belgium, Germany) in the European Theatre. This fighter-bomber squadron performed missions designed to disrupt the enemy’s communications system and to isolate the battlefield for the coming invasion. He was honorably discharged and returned home to Adams, MA on Veteran’s Day, November 1945. Mr. Pitoniak was last formerly employed as the Director of Engineering for the Hebrew Rehabilitation Center for the Aged in Roslindale, MA until retiring to Maine. Prior to retiring Harold had enjoyed a long, satisfying and diversified career in all phases of plant operations having been the First Class Engineer for various, well-known companies. Because of his strong work ethic, he continued to work on his own “retirement” projects. He found pleasure in renovating and expanding his home on Great East Lake which included extensive brickwork and other unique architectural designs. He was able to fabricate a solution for any mechanical or architectural need and enjoyed figuring best solutions. He was truly a man of many talents. After retiring from the Director of Engineering position, Harold moved to Maine with his childhood sweetheart and wife of almost 69 years, the former Mary Anne Tanguay, whom he married on May 4, 1946. Together they purchased several real estate holdings They enjoyed traveling to places such as Jordan, Australia, Norway, Mexico and the Caribbean Islands and frequently honeymooned along the lesser traveled areas of the Maine coast and back roads. They spent long hours on their boat while living on Great East Lake, enjoying their private peace. Their shared devotion and unconditional love was inspirational. They had known one another since fourth grade, but it was when they were in sixth grade, when Dad saw Ma on her tip toes reaching into her locker that he thought to himself, “that is my wife”. And they were together until her death. He is survived by his five children: Paula Pitoniak of Sanford, ME; Christina Stark and her husband, Robert, of Cobleskill, NY; Marcia Reddington-Lawton and her husband, Mark, of Mansfield, MA; Marc Pitoniak and his wife, Joy, of Houston, TX and Anne Haigh and her husband, Ed, of Quincy, MA; nine grandchildren, eleven great-grandchildren, and many nieces and nephews. He was predeceased by four brothers, Ralph, John, Edward and Robert Pitoniak and by two sisters, Elizabeth Balardini and Margaret Balardini. The funeral will be held on Friday, August 13th, at 10:30 AM from the PACIOREK FUNERAL HOME, 13 Hoosac St., Adams, followed by a Liturgy of Christian Burial at 11:00 AM in Notre Dame des Sept Douleurs Church, Adams. Burial will follow in Bellevue Cemetery, Adams, MA. Calling hours are Friday morning from 9:30 until 10:30 AM at the funeral home. In lieu of flowers, please, memorial donations may be made to St. Jude Children’s Research Hospital, 262 Danny Thomas Place, Memphis, TN 38105. To leave a message of condolence, or for directions, please go online to www.paciorekfuneral.com

The family of Mr. Harold R. Pitoniak created this Life Tributes page to make it easy to share your memories.

Send flowers to the Pitoniak family.