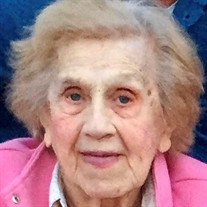 Mrs. Gladys J. (Wol) Czubryt, 97, formerly of Meadow St. Adams, died Wednesday morning, December 12, 2018 at Genesis Wayne Center in Wayne, PA. She was born in Adams on September 24, 1921, a daughter of the late John and Mary (Mularz) Wol, and attended Adams schools, including St. Stanislaus Elementary School. Mrs. Czubryt last worked at the former Waverly Fabrics in Adams until her retirement. She was a communicant of St. Stanislaus Kostka Church, Adams, and was a member of the Polish Women’s Alliance and the former TMTM Club, and immensely enjoyed gardening. Her husband, William J. Czubryt, whom she married on August 25, 1956, died on December 19, 1992. She is survived by her son, Paul Czubryt , and her son in law, Mark Ogino, of Berwyn, PA; two grandchildren, Kai Czubryt-Ogino and Wesley Czubryt-Ogino; as well as many nieces, nephews, grandnieces, grandnephews and godchildren. She was predeceased by her brothers, Stanley, Frank, Peter and Walter Wol, and by her sisters, Helen Garvin and Anna Dubis. The funeral will be held on Friday, Dec. 28th, at 10:30 AM from the PACIOREK FUNERAL HOME, 13 Hoosac St. Adams, followed by a Liturgy of Christian Burial at 11:00 AM in St. Stanislaus Kostka Church, Adams. Burial will follow in St. Stanislaus Kostka Cemetery, Adams. Calling hours are Friday morning, Dec. 28th, from 9:30 until 10:30, at the funeral home. Memorial donations may be made to The Sharing Foundation (to aid Cambodia’s Children), PO Box 600, Concord, MA 01742, or online at https://sharingfoundation.org/donate/ To leave a message of condolence, please go online to www.paciorekfuneral.com

The family of Mrs. Gladys J. Czubryt created this Life Tributes page to make it easy to share your memories.

Send flowers to the Czubryt family.