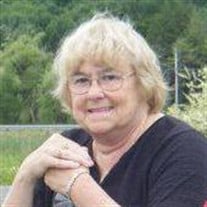 Gail Marie (Jones) Dix, 68, of North Adams, died on Wednesday, December 26, 2018 at Southwestern Vermont Medical Center in Bennington, surrounded by her loving family. She was born in North Adams on February 7, 1950, a daughter of the late Alden and Annabelle (McGinnis) Jones. She attended schools in North Adams and graduated from Drury High School. She then received her associate’s degree as a software specialist from Mildred Elley. Gail worked for many years for the former Sprague Electric Company in North Adams until its closure. While employed there she was the president of the IUE Local 200 then the IUE Local 207. She was a member of the Living Hope Community Church, North Adams. While in high school she played softball and later was an avid bowler. She was a strong believer in her Christian Faith and was a proud and avid supporter of President Trump. She is survived by her daughter, Tammy Dix and her husband Joseph of North Adams; two sons, Butch Dix and his wife Kim of North Adams and Steven Dix and his wife Jennifer of Adams; a brother, Larry Jones and his wife Mary of North Adams; her sister, Patricia Tomkiewicz and her husband Matt of North Adams; two sisters-in-law, Sandra and Julie Jones; eleven grandchildren, Alicia, Tabetha, Butch, Haylee, Joshua, Sarah, Jordan, Anna, Steven, Luke and Noah; and by six great grandchildren, Novalyn, Harrison, Luna, Benjamin, Bellamy and Kynlee. Her grandchildren and great grandchildren meant the world to her. She was predeceased by her longtime companion, Peter Kelleher; by four brothers, Donald, Charles, Richard and Alden Jones, Jr., and by a sister Priscilla Gaspardi Marchegiani. The funeral will be held on Saturday, December 29th at 8:45 A.M. from the PACIOREK FUNERAL HOME, 13 Hoosac St., Adams, followed by services at 10:00 A.M. in Living Hope Community Church, River St., North Adams, officiated by her nephew, Larry Jones., Jr. Burial will follow in Southview Cemetery, North Adams. Calling hours are today, Friday, from 4:00 P.M. to 7:00 P.M. at the funeral home. Memorial donations may be made to Pop Cares, P.O. Box 482, Williamstown, MA 01267.

Gail Marie (Jones) Dix, 68, of North Adams, died on Wednesday, December 26, 2018 at Southwestern Vermont Medical Center in Bennington, surrounded by her loving family. She was born in North Adams on February 7, 1950, a daughter of the late Alden... View Obituary & Service Information

The family of Gail M. Dix created this Life Tributes page to make it easy to share your memories.

Send flowers to the Dix family.