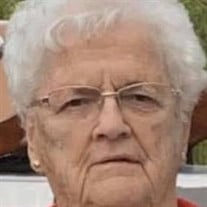 Mrs. Frieda Julia (Czubryt) Zabek, 90, of Adams, died Wednesday afternoon, November 3, 2021, at Williamstown Commons. She was born in Adams on June 7, 1931, a daughter of the late Stanley and Julia (Ciulonka) Czubryt. She attended Adams schools and graduated in 1949 from the former Adams High School. Frieda worked in the food service department at C.H. McCann Technical High School, until retiring in 1993. Earlier, she had worked at the former Berkshire Fine Spinning Co. in Adams. She was a communicant of St. Stanislaus Kostka Church, Adams. She served for twelve years as the District 1 Director of the Polish Roman Catholic Union of America, and was a Trustee for many years for St. Michael’s Society, PRCUA in Adams. She was also a member of the Polish-American Pulaski Club in Daytona Beach, Florida, where she enjoyed Polka dancing and volunteering in their kitchen. Her husband, Kasimer J. “Casey” Zabek, whom she married on September 3, 1951, died on February 15, 2015. She is survived by her six children, David Zabek and his wife, Joan, of Bristol, CT; Thomas Zabek and his wife, Charlene, of St. Johnsbury, VT; Susan McShane and her husband, Thomas, of Stamford, VT; Bonnie Zabek of Peru, MA; Nancy Herlihy of Pittsfield, MA; and Mary Ellen Daigneault and her fiancé, Michael Graves, of Adams; 10 Grandchildren, Jennifer Boada and her husband Stephen; Michael Zabek and his wife Jess; Sarah Stigliano and her husband, Matt; Nathan Hover, Dustin Hover and his wife, Nicole; Chelsea Deraway and her husband, Charles; Jordan and Jenna McShane, and Jake and Casey Daigneault; 2 Great Grandchildren, Maxwell and Vivian Boada; as well as many nieces, nephews, great nieces and great nephews. She was predeceased by her brothers Stephen, Frank, Stanley, William, Joseph, John, Casimer and Theodore Czubryt, and by her sister, Josephine Campedelli. The funeral will be held on Monday, Nov. 8th, at 9:00 AM from the PACIOREK FUNERAL HOME, 13 Hoosac St. Adams, followed by a Liturgy of Christian Burial at 10:00 AM in St. Stanislaus Kostka Church. Burial will follow in St. Stanislaus Cemetery, Adams. Calling hours are Sunday afternoon from 2 until 4 PM, in the funeral home. Memorial donations may be made to St. Stanislaus School, 108 Summer St. Adams, MA 01220. To leave a message of condolence, please go online to www.paciorekfuneral.com

The family of Mrs. Frieda J. Zabek created this Life Tributes page to make it easy to share your memories.

Send flowers to the Zabek family.