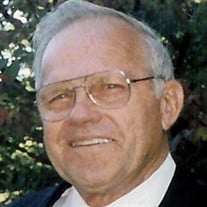 Mr. Frank S. Lazarczyk, 94, of Cheshire died peacefully on September 26, 2020. He was born in Adams, the son of the late Matthew and Sophia (Turek) Lazarczyk, and attended Adams schools. Frank was a Veteran of World War II, entering the US Army at the age of 18, serving with the 23rd Tank Battalion of General George Patton’s 12th Armored Division in France and Germany, from 1944 until his Honorable Discharge in 1946. He was awarded several medals including the European-African-Middle Eastern Theater Campaign Ribbon with two Battle Stars. Following his military service, Frank was a self-employed Builder-Developer and built many quality homes in this area, until his retirement at age 52. He was also a Trustee of the South Adams Savings Bank for 38 years and upon his retirement in 2002, was the longest serving elected trustee in the bank’s history. He was a communicant of St. Mary of the Assumption Church, Cheshire and a member of Adams Post 160 American Legion and Burnette-Bednarz Post 1995 Veterans of Foreign Wars, Adams. He enjoyed the outdoors, fishing, gardening, landscaping and travel, especially taking day trips and wintering in Florida with his wife, the former Rita M. Daignault, whom he married on September 1, 1945 and predeceased him on January 11, 2004. He is survived by two sons, Francis (Rosemary Jette) Lazarczyk of Lanesboro and Richard (Frances) Lazarczyk of Cheshire; three daughters, Jeanne (Frank) Pester of Cheshire, Marcia (William) Burdick of Niskayuna, NY, and Nancy (Brian) Clifford of Sandwich, MA; nine grandchildren, including Laura Delmolino, Jessica Jankowski, Matthew Lazarczyk, Lisa Lazarczyk, Holly Ogden, Jamie Pester, Julie Pester, Stephen Pause and Daria German; six great grandchildren and many nieces, nephews, grandnieces and grandnephews. He was predeceased by his brothers, John, Walter and Joseph Lazarczyk, who was killed in combat in Italy during World War II; and by his sisters, Veronica, Genevieve and Katherine Lazarczyk. Due to the current COVID-19 public health regulations, funeral services and burial will be private. There are no calling hours. In lieu of flowers, memorial donations may be made to Homes for our Troops, 6 Main Street, Taunton, MA 02780 or a charity of your choice. The PACIOREK FUNERAL HOME, Adams, is in charge of arrangements. To leave a message of condolence, please go online to www.paciorekfuneral.com

Mr. Frank S. Lazarczyk, 94, of Cheshire died peacefully on September 26, 2020. He was born in Adams, the son of the late Matthew and Sophia (Turek) Lazarczyk, and attended Adams schools. Frank was a Veteran of World War II, entering the US Army... View Obituary & Service Information

The family of Mr. Frank S. Lazarczyk created this Life Tributes page to make it easy to share your memories.

Send flowers to the Lazarczyk family.