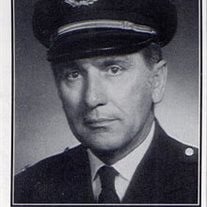 Former Adams Chief of Police Frank P. Kopec, 96, of 707 Maiden Choice Lane, Catonsville, Maryland, a longtime resident of 12 Second St. in Adams, died Monday morning at University of Maryland Medical Center in Baltimore. He was born in Adams on February 12, 1909, a son of the late Tytus and Anastasia (Wlodyka) Kopec, and attended Adams schools. He was active in local basketball and baseball leagues in Adams in his youth, and had also participated in several dramatic productions staged by the church. He moved to Maryland in 2000. Mr. Kopec was appointed as a patrolman to the Adams Police Department on November 26, 1936. He took military leave from the force on November 17, 1943, to serve in the US Navy during World War II, stationed in Boston with the Shore Patrol unit. Following his Honorable Discharge in 1945, he returned to the police force on January 21, 1946, and was promoted to Captain on January 20, 1953. He was appointed Chief of Police on November 1, 1960, and retired on February 29, 1968. He was a communicant of St. Stanislaus Kostka Church, Adams, where he served on the Parish Council, and was a member of the St. Stanislaus Kostka Society. He was a member of the Massachusetts Chiefs of Police Association, Adams Post 160 American Legion, Burnette-Bednarz Post 1995 Veterans of Foreign Wars, and the Knights of Columbus. He was also part of a group that was instrumental in the restoration of the Veterans Memorial atop Mt. Greylock in 1975. His wife, the former Mary M. Kalisz, whom he married on June 14, 1941, died on October 18, 1995. He is survived by 1 daughter - Frances Albert and her husband, Rowland, of Ellicott City, Maryland; 1 Son - Anthony Kopec and his wife, Shaileen, of Poughkeepsie, New York; 1 Brother - John Kopec of Adams; 4 Sisters - Blanche Rusek, Sophie Kopec and Victoria Zoltek, all of Adams, and Helen Kalisz of Baton Rouge, Louisiana; 1 Grandson - Paul Albert and his wife, Julie Brown, of Fort Collins, CO; 3 Granddaughters - Elisabeth Jarrett and her husband, Dan, of Baltimore, MD; Christina Kopec and Elizabeth Kopec, both of Boston, MA; and several nieces & nephews. The funeral will be held on Saturday, April 16, at 11:00 AM from the Auge`-Paciorek-Simmons Funeral Home, 13 Hoosac St. Adams, followed by a Liturgy of Christian Burial at 12 Noon in St. Stanislaus Kostka Church, Adams, celebrated by Rev. Daniel J. Boyle, Pastor of the Parishes of St. Stanislaus Kostka and Notre Dame & St. Thomas Aquinas, Adams. Burial will follow in St. Stanislaus Kostka Cemetery, Adams. Calling hours are Friday from 5 to 8 PM at the funeral home. Memorial donations may be made to the Adams Free Library, 92 Park St. Adams, MA 01220.

The family of Frank Kopec created this Life Tributes page to make it easy to share your memories.

Send flowers to the Kopec family.