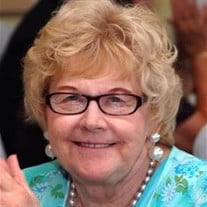 Frances I. (Straczek) Alibozek, 84, of Adams, died unexpectedly on Thursday, March 3, 2022, at Berkshire Medical Center in Pittsfield. She was born in Adams on February 3, 1938, a daughter of the late Stanley and Esther (Kowalski) Straczek. She attended schools in Adams and graduated from the former Adams High School with the class of 1956. Fran last worked in the produce department for Stop & Shop Supermarket in North Adams. Earlier she had worked for the former Sprague Electric Co. in North Adams and General Electric in Pittsfield. She was a communicant of the Parish of St. John Paul II at St. Stanislaus Kostka Church, Adams. She had been an avid bowler and was a member of the East Hoosac AA Women's Bowling League and the former TMTM Club in Adams. Fran enjoyed snowmobiling in the past, bingo, trips to the casinos, and watching the Boston Red Sox and New England Patriots. Her greatest joy was attending her grandchildren’s sporting events. She is survived by her daughter, Linda Grandshaw and her husband Tony of Adams; two sons, Douglas Alibozek and his wife Carrie and Richard Alibozek and his wife Amy, all of Adams; a brother John Straczek of Adams; a sister Joan Pause of Adams; six grandchildren, Kristin Saharczewski and her partner Mitch Tanguay, Kelsey Alibozek, Chad Alibozek, Nate Alibozek and his wife Amanda, Trevor Alibozek and Derek Alibozek; her former son-in-law Rich Saharczewski and former daughter-in-law Sue Alibozek and many nieces and nephews. She was predeceased by her former husband Chester F. Alibozek. The funeral will be held on Saturday, March 12th at 12:00 Noon in the PACIOREK FUNERAL HOME, 13 Hoosac St., Adams. Burial will be at a later date at the convenience of the family. Calling hours are Saturday from 10:00 A.M. until the time of the service at the funeral home. Memorial donations may be made to the Hoosac Valley Regional School District Athletics, 191 Church St., Cheshire, MA 01225.

Frances I. (Straczek) Alibozek, 84, of Adams, died unexpectedly on Thursday, March 3, 2022, at Berkshire Medical Center in Pittsfield. She was born in Adams on February 3, 1938, a daughter of the late Stanley and Esther (Kowalski) Straczek.... View Obituary & Service Information

The family of Mrs. Frances I. Alibozek created this Life Tributes page to make it easy to share your memories.