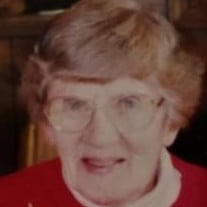 F. Isabelle Whalen, 101, of Pittsfield, died Wednesday evening, September 2, 2020, at Side by Side Assisted Living Facility in Pittsfield, where she had been a resident since 2015. She was born in Adams on June 23, 1919, a daughter of the late Charles and Ethel (McConnell) Whalen. She graduated from the former Adams High School in 1938. She attended North Adams State College, and studied Business Law at Berkshire Community College. She was employed at General Electric Co. in Pittsfield for 40 years as an executive legal secretary until retiring in 1982. Isabelle remained active in sports and charitable organizations well into her 90’s. Isabelle was a sports enthusiast and loved tennis. She was a long time tournament player at the General Electric Athletic Association, and was also the Women’s Singles Champion for many years, as well as serving on the Board of Directors at the GEAA for 12 years. She enjoyed hiking, and was a member of the Adirondack and Taconic Hiking Clubs, and the Appalachian Mountain Club. She hiked all over New England, and took several trips to Switzerland as well. Isabelle also loved music, and played the piano and clarinet. She was a member of the Berkshire Symphony Orchestra. She enjoyed snowshoeing and skiing into her 70’s, and biking into her 90’s. Isabelle volunteered at Berkshire Medical Center for many years. She learned Braille in 1966, and volunteered at Recordings for the Blind, working on a Braille typewriter translating textbooks and educational material for blind students. Also at that time, Isabelle volunteered weekly at the former Coolidge Hill School in Pittsfield, a school for physically challenged children. An avid photographer, she was a member of the Berkshire Museum Camera Club. She enjoyed taking outdoor photographs and photos of her family, including her many nieces and nephews. Isabelle enjoyed putting together wonderful slide shows, which were a regular and much anticipated activity at so many family gatherings. She was a communicant of Sacred Heart Church, Pittsfield. Isabelle loved her family dearly, and is survived by several nieces and nephews, and several great- and great-great nieces and nephews with whom she was very close. She was predeceased by her two brothers, Charles Whalen of Wisconsin in 2003, and Edward P. Whalen of Adams in 2006. Isabelle’s family would like to acknowledge the wonderful care provided to her by Side by Side Assisted Living and HospiceCare in the Berkshires. Funeral services will be private. There are no calling hours. Memorial donations may be made to HospiceCare in the Berkshires, 877 South St. Pittsfield, MA 01201.

F. Isabelle Whalen, 101, of Pittsfield, died Wednesday evening, September 2, 2020, at Side by Side Assisted Living Facility in Pittsfield, where she had been a resident since 2015. She was born in Adams on June 23, 1919, a daughter of the... View Obituary & Service Information

The family of F. Isabelle Whalen created this Life Tributes page to make it easy to share your memories.

Send flowers to the Whalen family.