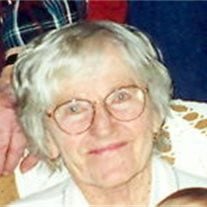 Mrs. Emily Helen (Rzepka) Rogge, 88, of 23 Randall St. Adams, died Tuesday afternoon at Sweet Brook Care Center in Williamstown. She was born in Adams on November 20, 1918, a daughter of the late Joseph and Magdalena (Nieroda) Rzepka, and attended Adams schools, including St. Stanislaus Elementary School. Mrs. Rogge was a homemaker for most of her life, but had worked at the former Berkshire Fine Spinning Co. in Adams for several years. She was a communicant of St. Stanislaus Kostka Church, Adams. She enjoyed spending time with her family, especially her grandchildren and great grandchildren, and cooking. She is survived by her husband of 65 years, Austin A. Rogge, whom she married on November 8, 1941; 1 Son - Joseph Rogge and his wife, Janet, of Adams; 1 Daughter - Betty Sweet and her husband, George, of Cheshire; 1 Sister - Edna Rohane of North Adams; 3 Grandchildren - Jennifer Kestyn and her husband, Robert, of Pittsfield; Jamie Rogge of Adams; and Paul Sweet and his wife, Kimberly, of Manchester, N.H.; 4 Great Grandchildren - Emily and Meredith Kestyn and Rachel and Adam Sweet; and several nieces, nephews, grandnieces & grandnephews. She was predeceased by a sister, Nellie Bobowiec. The funeral will be held on Saturday, November 25th, at 9:00 AM from the PACIOREK FUNERAL HOME, 13 Hoosac St. Adams, followed by a Liturgy of Christian Burial at 10:00 AM in St. Stanislaus Kostka Church, Adams. Burial will follow in St. Stanislaus Kostka Cemetery, Adams. Calling hours are Friday from 4 to 7 PM at the funeral home. Memorial donations may be made to St. Stanislaus Kostka Church through the funeral home.

The family of Emily H. Rogge created this Life Tributes page to make it easy to share your memories.

Send flowers to the Rogge family.