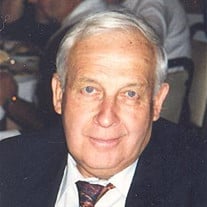 Mr. Edwin F. Gajda, 89, of Adams, died Tuesday afternoon, May 21, 2019, at his home. He was born in Adams on August 20, 1929, a son of the late Jacob and Veronica (Galuszka) Gajda. He attended Adams schools, graduating from the former Adams High School. He then attended the former Swain School of Design in New Bedford, MA. He was a Veteran of the Korean Conflict, serving with the 206th Field Artillery Battalion of the US Army, until his Honorable Discharge as a Sergeant in 1953. Mr. Gajda worked at General Electric Co. in Pittsfield for 40 years, retiring as a security manager. He was a communicant of St. Stanislaus Kostka Church, Adams, and St. Mary of the Assumption Church, Cheshire. He served as a member of the Board of Directors of the General Electric Credit Union from 1970 until 1990. He enjoyed traveling and spending time with his grandchildren. He is survived by his wife, the former Mary S. Dunaj, whom he married on May 4, 1957; two daughters, Karen Campagna and her husband, Donald, of Lenox, and Marcia Lobik and her husband, David, of Virginia; one son, David Gajda and his wife, Michelle, of Cheshire; six grandchildren, Kristin Campagna-Marr and her husband, Devin; Alex Campagna, Josh Gajda, Hannah Gajda, Jordan Lobik and Spencer Lobik; one brother, Joseph Gajda of Poughkeepsie, NY; and several nieces, nephews, grandnieces and grandnephews. He was predeceased by his sisters Stella Socha, Adella Krol and Monica Meczywor Dobbs. The funeral will be held on Friday, May 24th, at 8:30 AM from the PACIOREK FUNERAL HOME, 13 Hoosac St. Adams, followed by a Liturgy of Christian Burial at 9:30 AM in St. Stanislaus Kostka Church, Adams. Burial will follow in St. Stanislaus Kostka Cemetery, Adams. Calling hours are today, Thursday, from 5 to 7 PM at the funeral home. Memorial donations may be made to St. Stanislaus Kostka Church, PO Box 231, Adams, MA 01220; or to St. Mary of the Assumption Church, 159 Church St. Cheshire, MA 01225. To leave a message of condolence, please go online to www.paciorekfuneral.com

Mr. Edwin F. Gajda, 89, of Adams, died Tuesday afternoon, May 21, 2019, at his home. He was born in Adams on August 20, 1929, a son of the late Jacob and Veronica (Galuszka) Gajda. He attended Adams schools, graduating from the former Adams... View Obituary & Service Information

The family of Mr. Edwin F. Gajda created this Life Tributes page to make it easy to share your memories.

Send flowers to the Gajda family.