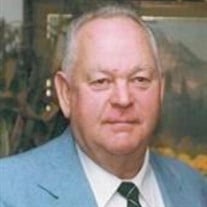 Mr. Edwin P. “Poppy” Biros, 86, of Adams, died Sunday morning, March 14, 2021, at Berkshire Medical Center. He was born in Adams on May 10, 1934, a son of the late Peter and Mary (Tomaszewski) Biros, and attended Adams schools. He was a Veteran of the Korean Conflict, serving with the US Army. Poppy worked for Specialty Minerals, Inc., and its predecessor, Pfizer, Inc. for many years until retiring. He was a communicant of the Parish of St. John Paul II, Adams. and a member of the Adams Turners. An avid golfer, he was a member of Forest Park Country Club. His first wife, Carmela (Lentine) Piscioneri Biros, whom he married on Sept. 6, 1958, died Feb. 8, 1981. His second wife, Shirley (Tanguay) Carlow Biros, whom he married on Aug. 2, 1985, died Oct. 15, 2014. He is survived by his stepsons, James Piscioneri and his wife, Nancy, of North Ft. Myers, FL; Anthony J. Piscioneri and his wife, Patricia, of Adams; Allen Carlow of Adams; Bruce Carlow of North Adams and Brian Carlow of Savoy; a brother, Edward Biros of Adams; two sisters, Gladys Czubryt and Cecelia Michalenko, both of Adams; several stepgrandchildren, including Anthony T. Piscioneri of Adams; several step great grandchildren, and many nieces, nephews, grandnieces and grandnephews. He was predeceased by seven brothers, John, Frank, Stanley, Theodore, Albin, Joseph and Richard Biros, and by two sisters, Jane Armata and Alice Cichy. Funeral services will be held on Friday, March 19th, at 11:00 AM in the PACIOREK FUNERAL HOME, 13 Hoosac St. Adams. Burial will follow in St. Stanislaus Kostka Cemetery, Adams. Calling hours are Friday from 10:00 AM until the service, at the funeral home. Due to current regulations, social distancing and use of face masks will be strictly enforced, and admittance to the funeral home may take a bit longer than usual due to mandated crowd limits in the funeral home. Memorial donations may be made to the Adams Ambulance Service, 185 Columbia St. Adams, MA 01220, or to the Alert Hose Co., 3 Columbia St. Adams, MA 01220. To leave a message of condolence, please go online to www.paciorekfuneral.com

The family of Mr. Edwin P. Biros created this Life Tributes page to make it easy to share your memories.

Send flowers to the Biros family.